SIO Karnataka Launches Campaign on “Many Religions, One India” 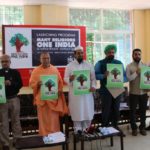 Bengaluru: “India is a pluralist society that creates magic with democracy, rule of law and individual freedom, community relations and cultural diversity.” With these words, the Students Islamic Organization of India (SIO) Karnataka wing, has launched its year -long campaign on the theme ‘Many religions, one India’. At a gathering with guests, Veerabhadhra Chennamalla Swamy, Nidumamidi Mutt; Rev. Manohar Chandra Prasad, Pastor, CSI Church; S. Parab Joth Singh Bali, President, Gurudwara Bangalore; Maulana Maqsooq Imran Rashadi, Imam-Khatheeb City Jamia Masjid; K. M Ashraf, State Secretary JIH Karnataka and Mohammed Rafeeq, President, SIO Karnataka, on May 2, at the Press Club, Bengaluru, a statement was passed that “it is high time that we pledge to safeguard the idea of India. This requires us to unite as a nation in spite of our diversity”. “Sense of belonging comes through the experiences of justice, brotherhood and equality of opportunities. As our beloved nation marches ahead, let us realize that we are human beings first,” said the statement. It further read as, “Let our conviction be a humane society with justice as its soul and let our actions be an emblem of mercy, forgiveness, brotherhood and sustainable co-existence. Our tomorrows cannot be complacent repeats of our yesterdays”. The campaign is being organized in order to create peace and brotherhood in India. Various activities and programmes like, street plays, dramas, film shows, seminars and conferences are planned through this campaign.
(twocircles.net)