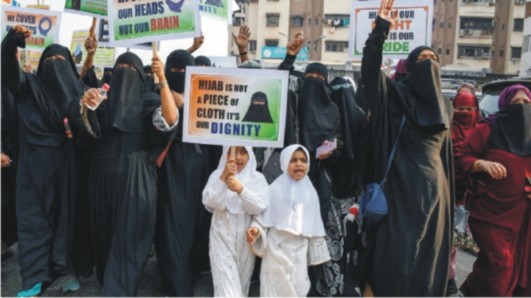 ‘Space Shrinking but not closed for Muslims down South’

Why should Muslims take the responsibility to defeat any political party?
They should put forward their demands to all political parties, vote for whichever party accepts it, says Muslim legal expert

Angry over Muslim traders downing shutters on March 17 to protest against the Karnataka High Court verdict on the hijab (headscarf) conflict, the managing committee of the Hosa Mariguda temple in Kapu of Dakshina Kannada district wanted that stalls owned by Muslims be barred from participating in the auction organized for Suggi Mari puja held on March 22 and 23. The same demand was made at many such temple fairs held after two years due to the pandemic in Udupi, Shivamogga, Chikkamagaluru, and other districts.

*On March 24, RDPR minister K S Eshwarappa on the floor of the Legislative Assembly, said, “Someday in the future, Muslims and Christians in the country will associate with the RSS.”

*In January 2020, BJP MLA G Somashekar Reddy, representing Ballari City, cautioned Muslims participating in Anti-Citizenship (Amendment) Act protests of dire consequences. “We Hindus are 80% in India, and if the 17% Muslim population damages our property, we just can not stand by and watch,” Reddy said. He suggested minorities need to adapt to Indian culture if they want to live in India.

Such threats are in contrast to the assurance held out by Prime Minister Narendra Modi, who, after winning a historic mandate in the 2019 Lok Sabha elections, had reached out to the minorities. In his speech on May 25, after being elected as leader of the National Democratic Alliance, Modi said he wanted the newly-elected MPs to “remove the imaginary fear from the minds of minorities,” for which he had received appreciation from eminent Muslim groups.

However, the “imaginary fear” seems to have got translated into a reality with reports of hate speeches against the Muslims, call for genocide at a religious conclave in Haridwar, moral policing by right-wing groups, the hijab row, polarisation of votes in the recent Assembly elections with the latest being a movie ‘The Kashmir Files’ used as propaganda for pitting Kashmiri Pandits against Muslims. “The silence of the political leadership over all these has made the Muslims wonder whether they have been reduced to second-class citizens with no space and identity in the absence of support from their community leaders,” a political observer said.

Prof Muzaffar H. Assadi, political scientist and Dean, Faculty of Arts, University of Mysore, said the space is shrinking but not completely closed for the minorities. According to him, the BJP is using the democratic process to legitimize their rule -for this, the power of vote, which is recognised is being used. According to him, the AAP’s massive mandate in Punjab makes one suspect the BJP’s handiwork.

“Somehow, they want the narrative of ‘Congress Mukt Bharat’ to be alive, but we still have Tamil Nadu, West Bengal, Telangana, Maharashtra, and Odisha where their process is not complete. We are reading too much into the election results of the five states,” he added.

To substantiate the point that space has not closed as yet, he said Karnataka is a caste-based and not a completely Hindutva state and for the BJP to move into this is not easy. But a new form of ghettoization happened in the coastal belt, a reflection of the Gujarat model, which needs to be broken. This was happening with ghettoization in the apartments in Mangaluru, he observed.

On the debate that polarisation of votes helped the BJP return to power in Uttar Pradesh, Faizan Mustafa, Vice-Chancellor, Nalsar University of Law, Hyderabad, and legal scholar felt in terms of development; the BJP did better than previous governments. The votes were not polarised on religious lines; some of the Muslim women who voted for the BJP were beneficiaries of welfare schemes. “My experience is, one shouldn’t read too much into electoral losses or victories. The identity of such a huge community (Muslims )cannot wane because of electoral losses of a political party,” he maintained.

Regarding the perception that BJP shuns giving tickets to Muslim candidates and the Muslims do not vote for the BJP, Mustafa asked: “Why should Muslims take the responsibility to defeat any political party? They should put forward their demands to all political parties, and whichever party accepts it, vote for them. To preserve secularism cannot be the burden of Muslims alone because when they decide to support one political party or oust any party then counter polarisation happens. Don’t take responsibility for ensuring secularism and democracy. All citizens should be equally concerned about democratic erosion.

All political parties are the same, put forward your demands, and whoever is willing to meet your demands sympathetically, one should vote for them.”

Bengaluru-based theatre personality and social activist Zafer Mohiuddin stated there is an identity crisis among Muslims. They’re living in fear and feel marginalized. “You are questioned on your fundamental right to wear hijab, saying whether Islam or Quran prescribes it. On the other side, he added that a narrative of hatred is built by promoting films such as The Kashmir Files. When it came to voting, the Muslim votes were getting scattered, with secular parties not coming together on a single platform. It’s time all non-BJP parties unite before the 2024 parliamentary elections to counter the BJP.

The former head of the Malayalam department at Calicut University, M.N. Karassery, feared that a two-third majority for the BJP in the next Lok Sabha polls would raise concerns not only about the Muslim identity but also a possible change in the description of India as a “Sovereign, Socialist, Secular, Democratic Republic”.

“The BJP would prefer to drop the words ‘Secular’ and ‘Socialist’ from the Preamble, which former Prime Minister Indira Gandhi had introduced through the 42nd Amendment,” Krassery, who is also an activist and writes on gender justice, said.

Woman writer from Kerala M.A. Shahanas said the hate politics of BJP is reflected in their decisions, where religious symbols are banned, but a move to introduce Bhagavad Gita in the syllabus is on.

Lack of Muslim leadership
Prof Mustafa said the community does not have a strong leader as it is not a homogenous one, and in different states, there are different leaders. “We definitely need a moderate, progressive leader who can bring all these people of the community on one platform and be able to talk to the political parties and ensure a give and take under the broader scheme of the Constitution. We have examples of Maulana Abul Kalam Azad,” he added.

Karassery, who hails from Kerala, where Muslims account for 27% of the total population, maintained there is no pan-India leader from the community now, such as Maulana Abul Kalam Azad, Humayun Kabir, or Rafiq Zakaria. He claimed that the likes of persons like AIMIM MP Asaduddin Owaisi are perceived to be in cahoots with the BJP.

Assadi stated the absence of Muslims in the civil society was also a reason for concern, and the Hijab row was one such. “We had Islamic feminists controlling the issue when the need was for Muslim feminists. Moves like this will only help consolidate the identity of Hindus,” he added.