State of Higher Education in India 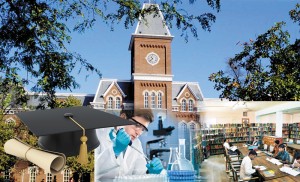  Higher education aims at developing human resources for economic growth in contrast to primary and secondary education which focus on social development of any nation. Hence, the learning after secondary schools should focus on equipping the students with specialized skills.
 India has around 700 universities and 35,000 colleges. India spends 3.5% of its GDP on education but the allocation for higher education accounts for merely 0.6% of the GDP.
 Currently, the General Enrolment Ratio (GER) in higher education in India is only 19%. India aims at improving it to 32% by 2020. It is thus spread over 12th as well as 13th Five-Year plan.
 India has the largest component of young (14-35 years age group) population but highest unemployment problem. 60% of India’s population is in working age group.
 70% of new jobs opportunities will be skill based. Our graduates lack employability.
 Thirteen million students are entering every year into the age of Higher Education. But enrolment capacity is only three million. We need to provide proportional continuum. While 49% of those in 15-16 group come up to secondary level, only 17% of 16-18 group are enrolling for higher education. There is need to develop faculty, provide market based salaries to teachers and improve teaching.
 India has the 3rd largest higher education system in the world after China and the US with enrolments in excess of 27.5 million students. Inspite of this the GER is much lower than these two countries. The 12th Five-Year plan targets to create an additional enrolment capacity of 10 million in higher education of which about 6.2 million is expected to be created in the private sector.

India’s Absence in Global 200 Best List
 No Indian university figures in the Global 200 Best Universities list. 68% Indian universities are said to be medium or below average.
 A very crucial requirement for being in Global Best universities is good proportion of students coming from overseas and considerable proportion of faculty members should also be drawn internationally. The US which has the largest number of Global Best universities which have 8.5 lakh foreign students on their rolls. For instance, 40% of Purdue University students are from overseas.
 Global Best universities focus on research and innovation. But in India research has mainly been assigned to specialized research institutes funded by the Central Government. Few universities have tie-ups with corporate and industries for research. In the US 80% of research in universities is funded by corporate sector.
 Global ranking comes with good publications. If research output has to be more, teaching load has to be reduced. Support for research is predicated on funds, good labs, and invitation of good scholars.
 In India, we tend to keep the students in classroom for long hours. In the US at PG level, the students spend only 18-20 hours a week in classroom and rest in library, lab or industry or research.
 In India, the faculty does not want to change. Teachers in India want to repeat what they have been taught and trained in.
 India witnesses outgo of $2 billion on students going overseas for higher education while Australia earns $15 billion from foreign students taking up courses in its universities. India has merely 28,000 students which mainly come from the Gulf and African countries.

Major Irritants on the road to Excellence
 Invariably entire higher education is imparted through English medium all across India. But students arrive in colleges from schools imparting instructions in a variety of language mediums. Comprehension of lessons is therefore a major problem. Hence, most students memorise their lessons and spew it out on exam answer sheets rather than understanding the concepts. Memorisation can help them score marks but fails to induce analytical reasoning so very essential for innovation and research.
 Our schools do not inculcate reading habits. If languages have to have a sound grounding, children should read a lot of general literature. They would not read Thomas Hardy, O. Henry or Charles Dickens. But would happily read Tinkle and pick up common English vocabulary and sentences.
 India produces about 15 lakh engineering graduates every year. But an Allen and Booze Survey says 74% of these graduates are simply unemployable. The challenge is how to impart quality to these graduates. It should be mandatory to devote 3% to 5% times for hands-on experience in the industry.
 We have 10,000 institutions under All India Council of Technical Education with 28 lakh seats. They run 40,000 programmes. Number of seats have been increasing by 1.2 lakh annually during the last five years. We need about six lakh technically qualified teachers. But only 3.6 lakh are available. There are no institutes to train the teachers for engineering colleges and polytechnics.

Research Potential in India
 Foreign Corporate have established 800 RandD institutions in India which employ 175,000 researchers and spend billions of dollars to enhance their profitability. Why the same genius cannot be used for research by Indian universities and institutes?
 Three of the South East Asia’s universities finding a place in the 200 Global Best list employ more than a dozen each Indian academics. Why cannot we set up such universities at home?

(This report has been compiled by Maqbool Ahmed Siraj following his participation in the Conclave on Higher Education by the Confederation of Indian Industry held at Coimbatore on November 29-30, 2013.)