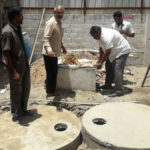 Coimbatore: Masjidhul Ihsaan mosque at Karumbukkadai is doing its bit to recharge groundwater using the ablution water. They have adopted the method used by the NGO Siruthuli which works for water conservation. Speaking to The News Minute, Abdul Hakkim, Public Relations Secretary, Jamaat-e-Islami Hind (JIH), says, “Everyday Muslims perform five times prayer. They wash their face, hands and feet every time before prayer, usually all the water goes to the drainage. We were thinking of ways how to save this water. Everyday about 500 litres of water is used up that way,” he said. Talking about the method, he said, “Similar to rain water harvesting, we have set up structures to purify the waste water so that the groundwater gets recharged. We have two pits that are 10 feet and 5 feet wide and the water from the mosque is let into the pit”. They are planning to extend the plan to 100 mosques. He said that around 10,000 litres of water is being consumed per week in mosques across the city for ablution purpose. He also added that more mosques are also interested in adopting the same method. (The News Minute)