Nearly 80% of the world’s refugees are Muslims. Yet no concerted effort is seen from within the Muslim ummah to address the problem, happy as it is in observing Ramazan fasting and new-found piety of umrah pilgrimages at Makkah, which has been developed into a business mart by the profligate Saudis. 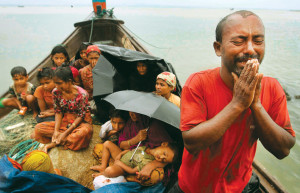 The world is facing the worst ever refugee crisis since the Second World War. Look at the facts:
One million refugees desperately in need of resettlement.
Four million Syrian refugees struggling to survive in Turkey, Lebanon, Jordan, Iraq and Egypt.
More than three million refugees in sub-Saharan Africa, and only a small fraction offered resettlement since 2013.
3,500 people from north African countries drowned while trying to cross the Mediterranean Sea in 2014 — 1,865 so far in 2015.
300 people died in the Andaman Sea in the first three months of 2015 due to starvation, dehydration and abuse by boat crews.
World leaders are condemning millions of refugees to an unbearable existence and thousands to death by failing to provide essential humanitarian protection, says Amnesty International in its most recent Report published last month, ahead of World Refugee Day on 20 June.
The Report titled The Global Refugee Crisis: A conspiracy of neglect explores the crisis from the Mediterranean Sea to the seas separating various islands of Indonesia and calls for a radical change in the way the world deals with refugees.
Says Salil Shetty, Secretary General of the Amnesty International: “We are witnessing the worst refugee crisis of our era, with millions of women, men and children struggling to survive amidst brutal wars, networks of people traffickers and governments who pursue selfish political interests instead of showing basic human compassion.”

Number of Refugees
There were 19.5 million refugees worldwide at the end of 2014, 14.4 million under the mandate of UNHCR, around 2.9 million more than in 2013.
The other 5.1 million Palestinian refugees are registered with the United Nations Relief and Works Agency (UNRWA).
During the year, conflict and persecution forced an average of 42,500 persons per day to leave their homes and seek protection elsewhere, either within the borders of their countries or in other countries.
Developing countries host over 86% of the world’s refugees, compared to 70% ten years ago.
In 2014, the country hosting the largest number of refugees was Turkey, with 1.59 million refugees. By the end of 2014, the Syria had become the world’s top source country of refugees, overtaking Afghanistan, which had held this position for more than three decades. Today, on average, almost one out of every four refugees is Syrian, with 95 per cent located in surrounding countries.
Last year, 51% of refugees were under 18 years old. This is the highest figure for child refugees in more than a decade.
An estimated 13.9 million people were newly displaced due to conflict or persecution, including 2.9 million new refugees. By the end of 2014 the number of people assisted or protected by UNHCR had reached a record high of 46.7 million people. (Source: http://www.unhcr.org.uk)

80% of World’s Refugees are Muslims
Though the world bodies do not provide figures of religious composition of refugees, even a cursory glance suggests that eighty per cent of the world refugees are from Muslim countries or regions i.e., Palestine, Syria, and Afghanistan. And tragically enough, around the same proportion is being hosted by the Muslim countries i.e., nearly five million Palestinians by neighbouring Arab nations, 1.6 million Syrians by Turkey, and nearly three million Afghans by Pakistan who have stayed put there for the last three decades.
Syria: Source of the Worst Crisis
More than four million refugees have fled Syria, 95% of them are in just five main host countries: Turkey, Lebanon, Jordan, Iraq and Egypt. These countries are now struggling to cope. The international community has failed to provide them, or the humanitarian agencies supporting refugees with sufficient resources. Despite calls from the UNHCR, the UN Refugee Agency, far too few resettlement places have been offered to Syrian refugees.
Mediterranean: The most Dangerous Route
The Mediterranean is the most dangerous sea route for refugees and migrants. In 2014, 219,000 people made the crossing under extremely dangerous conditions and 3,500 died attempting it. In 2014, the Italian authorities rescued over 170,000 people. However in October 2014, Italy, under pressure from other EU member states, cancelled the rescue operation. As of 31 May 2015, 1,865 people had died attempting the Mediterranean crossing, compared to 425 during the same period in 2014.

South East Asia: Turning away the desperate
In the first quarter of 2015, United Nations High Commission for Refugees (UNHCR) reported that some 25,000 people attempted to cross the Bay of Bengal. This is approximately double the figure for the same period in 2014. This Bay of Bengal sea route is predominantly used by Muslim Rohingyas from Myanmar and Bangladeshi nationals.
On 11 May, the International Organization for Migration estimated that there were 8,000 people stranded on boats close to Thailand. Many of those aboard were believed to be Rohingya fleeing state-sponsored persecution in Myanmar. Indonesia, Malaysia and Thailand were turning back these boat people. UNHCR estimated that 300 of them died in May this year due to starvation, dehydration and abuse by boat people.

Causes for Displacement
In the West Asian region, brutal Arab regimes known for their repression of dissent, oppression against opponents, suppression of dissent, torture of detainees, tyranny against women, illegal detentions, injustice against religious and ethnic minorities, savagery and brutality of forces like ISIS (or Daesh in Arabic), totally corrupt and criminalized justice system, sectarian enmity promoted by regimes like the one in Saudi Arabia, sends out the largest contingent of refugees.
In the South East Asian region, the Rohingya Muslims are fleeing the persecution by the Burmese regime. The economic misery in Bangladesh too forces people to leave the country for finding employment in economically dynamic nations like Thailand, Malaysia and Indonesia.
In Sub-Saharan Africa, it is people who are fleeing conflict in South Sudan, Somalia and Central African Republic who stray into countries like Kenya, Ethiopia and Tanzania.