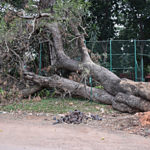 Bengaluru: The mango tree planted by Tipu Sultan 250 years ago in Bengaluru’s famed botanical Lal Bagh, will be preserved as an artistic site. The tree was uprooted during torrential rains a month ago and lies on its huge trunk near the bandstand.
According to Mr. M. R. Chandrashekhar, Deputy Director of Lal Bagh, the authorities have contacted landscape artists to turn the tree into an object of art due to historic significance of the tree. Tipu was a nature lover and had organized planting of trees in his kingdom on a mass scale. According to historical records, Tipu had included planting and nurturing of trees for offenders as a penalty for certain crimes. He and his father Hyder Ali had laid the foundation of Lal Bagh in Bengaluru which was later developed by the British. Spread over nearly 240 acres, it serves as the Botanical Garden as well as the Headquarters of the Horticulture Department of Karnataka Government.
Another mango tree planted by the 18th century Mysore ruler came crashing down a few years ago and the one that was uprooted in October was one among the few remaining.
Samples from the uprooted tree are being sent to Birbal Sahni Institute of Paleobotany in Lucknow for carbon-dating. The scientists would decode the rainfall pattern through analysis of the data present in the annual rings of the tree. This would indicate the period of drought, harsh summers and good rains. (By A Staff Writer)