Islamic Voice 0 May, 2016 12:00 am
British Sowed Seeds of Communalism’
“Muslims give more to charity in Britain”: Evans
Hyderabad’s Kind Breadman 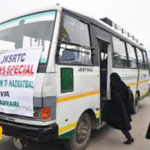 Srinagar: A special bus service for women was launched in Srinagar on April 19, and this step, seen as a possible outcome of Mehbooba Mufti taking over as the first woman Chief Minister of JandK, has met with loud approval from women commuters. The services, which will run on an hourly basis from 8 am to 6 pm everyday, are being provided by the Jammu and Kashmir State Road Transport Corporation (JKSRTC) and private transporters on routes like Lal Chowk to Hazratbal Lal Chowk to Soura (to and fro), Nowgam Railway Station to Lal Chowk via Pantha Chowk. Women commuters have for long complained about the harassment they face at the hands of male commuters while travelling in the public transport. SSP Traffic Srinagar, Maqsood-ul-Zaman has constituted a team of traffic police who will monitor the bus services to ensure its smooth operation in the city.
(TwoCircles.net)