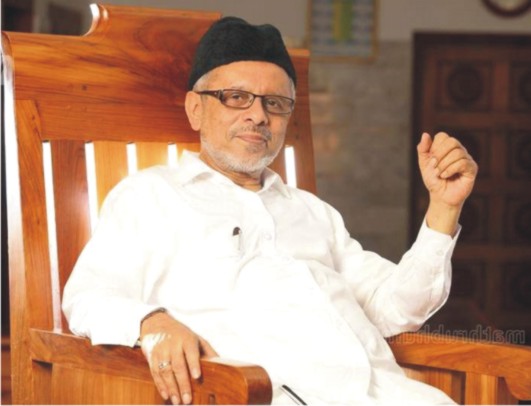 Thiruvananthapuram: The Indian Union Muslim League (IUML) Kerala state president Panakkad Hyderali Shihab Thangal, 74, died in Angamalli in Ernakulam district on March 6. He was buried in the burial ground in Panakkad in the Malappuram district. He was also the incumbent president of the Darul Huda Islamic Academy and the Vice President of the EK faction of Samastha Kerala Jamiyyathul Ulama, one of the Sunni Muslim organizations in Kerala.

Thangal began his career as a qazi in Malappuram as the third son of Sayyid Pookoya Thangal, the president of IUML and the Sunni scholars’ group Samastha. He was the founder of Sunni Yuvajana Sangam, a Sunni youth organization. He was the party’s Malappuram district president for 18 years as an IUML leader. Following the death of his elder brother, Sayed Mohhammedali Shihab Thangal, he became the president of IUML in August 2009.

Hyder Ali, a suave politician, carried on the Panakkad family’s legacy of encouraging communal tolerance and attempting to maintain the Muslim minority close to mainstream politics under the umbrella of the UDF. He has served as the qazi in a number of mosques in Kerala. Muslims have long knocked on the door of the Panakkad Thangal family’s ancestral Kodappanackal house seeking solutions to their troubles. The Palakkad Thangal family’s ancestry is tied to Prophet Mohammad.

“Thangal stood for harmony,” claimed opposition leader VD Satheesan. His death is a loss to the secular world when the country is under assault from fascist and sectarian groups.”

In a condolence statement, Baselios Mar Thomas Mathews, the head of the Malankara Orthodox Church, said Thangal had held all people close to his heart, regardless of religion. According to the bishop, his death is a loss to Kerala’s secular society.