Syrian journalist Muhammad al-Bawadi questions the usual refrain kept up by the Islamic clerics and mashaikhs. 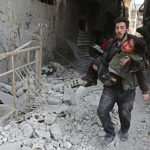 A Syrian journalist stated that he desired his country to become a nation-state just as any non-Muslim country. A Sheikhul Islam reacted to his statement thus: The reason for our backwardness is our distance from the Quran and the Sunnah. This reaction is neither strange nor is it being said for the first time. Islamic clerics and ulema are found to be reiterating the same for decades ad nauseam. They fail to explain why Japan, the United States, China, Russia, and Europe became developed countries without following the Islamic Sharia.

Inconvenient Questions
Syrian journalist Muhammad al-Bawadi replies: The reason for our backwardness is the retrogressive version of Islam which is a product of the dark minds of our Ulema and Mashaikh. It is so plainly evident that one does not need any special proof to drive the point home. Just take a profound look at ourselves and consider the following points:
Whoever is keen to seek knowledge, he heads for non-Muslim countries.
Whoever desires a life of dignity, he goes to the very same non-Muslim-ruled states.
Whoever wants to protect his wealth, he deposits the money in the banks owned by non-Muslims.
Whoever is looking for some sort of information, he accesses the portals and websites hosted and managed by non-Muslims.
Those who are fleeing war, devastation and repressive regimes find asylum in the very same countries ruled by non-Muslims, not the land of the revelation of the Quran, nor the oil-rich sheikhdoms, nor the seat of old civilization Egypt.
Those fleeing Muslim lands, braving overpowering waves of the oceans, are rescued by non-Muslims, treated by their Red Cross and hosted for months without end with supply of food and medicines.

Look Within
But many Muftis keep issuing fatwas calling for the execution of ‘non-believers’, destruction of their crops and holding back water supply to them. They forget that the automobiles they ride or drive, the computers they use for all kinds of work and the cell-phones which they would not like to stay away from for a moment have all been invented and manufactured in the states ruled by non-Muslims.
People of other faiths are constantly on lookout for ways to reconcile their differences or to keep the differences to the minimum. They do not issue diktats to kill people or rape women. People of other faiths do not order killing of people who desert their religion of birth and convert to other faiths. But Muslim clerics are just waiting for any opportunity to excommunicate their fellow-believers. States ruled by non-Muslims do not imprison people who hold a different opinion on certain policies. But Muslim countries hardly ever tolerate dissent. Thieves, liars and bad characters do not camouflage themselves under a religious garb in locales ruled by non-Muslims. But in countries ruled by Muslims, most people take shelter under the religion to hide their misdeeds. I request the Islamic clerics and mashaikh to keep your backwardness, your bestiality and your fatwas to yourself.

Islam is not Scary
I am a Syrian and would like my nation to be one like that of people of other faiths. I am not saying this merely just for the heck of it. I am writing this with a fully-awakened conscience and complete conviction and with full faith in Allah, His angels, Books, Prophets and the Day of Judgment. I ponder over the verses of the Holy Quran and draw deep insights from them and even invite people to the message of God with wisdom. I am not like those clerics who are continually engaged in turning Islam into a scary and sinister religion and one that does not have anything positive to offer to humanity.