Bill Against Triple Divorce is Flawed’ 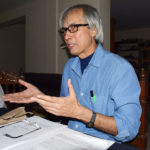 Bengaluru: “The Muslim Women (Protection of Rights on Marriage) Bill 2017 is flawed and needs to be withdrawn. It has been drawn in haste, is full of contradictions, does not sound reasonable and just and is likely to be thrown out by the Supreme Court when challenged”, says Faizur Rahman, Secretary-general of the Chennai-based Islamic Forum for Promotion of the Moderate Thought.
Rahman was speaking at a meeting called by the Centre for Contemporary Studies here on February 18. He said the Supreme Court in its judgment in the Shayara Bano case had set aside the practice of instant triple divorce and rendered it legally ineffective. In other words, the pronouncement of talaq thrice in quick succession does not dissolve a Muslim marriage and hence there does not arise the question of punishing a husband for merely uttering three meaningless words. “But the law seeks to punish the man for something that does not abruptly end a marriage”, he added.
Elaborating further, Rahman said, the Bill turns the pronouncement of triple talaq into a cognisable offence (in which a police officer can arrest a person without warrant) for the purported breach of a contract that is civil in nature thereby turning it into a crime. This is not acceptable as there can be no punishment for something that does not constitute a crime in the light of the recent SC judgment. He said the bill was absurd as it makes the husband liable for maintenance of wife and children and also entitles the woman (against whom an inapplicable talaq has been pronounced) to seek custody of children. “How can the question of maintenance and custody arise when the marriage is intact?” he asked.
He said several political parties have asked for amendments in the Bill and have even asked for the constitution of a Select Committee to go into its provisions. He said it is likely to come up when the two houses of the Parliament gather after the interregnum in the Budget session on March 5.
Rahman said the Supreme Court had justifiably set aside the triple divorce on the grounds of it being non-Quranic, unilateral, arbitrary, unjust and unreasonable. He said the Quranic verses contained in Surah Baqrah (ch. 2), Surah Nisa (ch. 4) and Surah Talaq (ch. 65) had clearly laid down the procedure oftalaq. He said the Muslim Personal Law Board had totally ignored these aspects of the Quranic procedure and had been insistent upon retaining something that did not fulfill the demands of justice.
Rahman said triple talaq is bad in law and bad in theology. The ulema have described it as a sin. Any sin cannot be good in law. The above verses read together lay down a seven-step procedure for talaq. Elaborating he said, first the couple are advised to counsel each other (Faizuhunna), 2-Wahjuruhunna (opt for physical separation even while they remain under the same roof, 3- Wazribuhunna ( explain and discuss consequences of frosty relationship), 4-Arbitration and reconciliation with the help of two mediators drawn from two sides, 5- Pronounce the first talaq, following which three-month Iddah starts, 6-If the Iddah period expires, they can recontract the marriage, 7-If the second talaq is pronounced within the period of Iddah, the marriage is dissolved irrevocably.
Rahman explained that although the procedure of the talaq has been laid down with reference to men, the same procedure would be applicable if the divorce is initiated by women. Khula has not be mentioned either in the Quran or the hadiths, he pointed out. He said the Quranic law cannot be gender-biased.
He said the Supreme Court judgement has upheld this Quranic procedure and set aside (triple talaq) what was extraneous to it. He said in doing so, the apex court has clarified that only those aspects of Muslim Personal Law are sacrosanct that form the essential part of the religion.