Proposal for women pilgrims aged 45 and above to travel in group of four or more women; Reintroduction of sea voyages to be explored; Embarkation points to be cut down to nine from current 21. 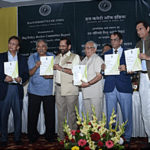 1 For the next five years i.e., 2018 to 2022, the Haj Committee of India (HCOI) and the Private Tour Operators (PTO) will share the pilgrim quota on 70:30 basis. (Currently the quota of Haj pilgrims allotted to India is 170,000. It is periodically reviewed between the Govt. of India and Saudi Arabia).
2 The reserved category of applicants i.e., for those who are 70 and above and those who are applying for the 4th time (having failed in getting a slot in the first three times), will be abolished.
3 Of the 70% allotted to the HCoI, the Government of India will take out 625 for Khadim ul Hujjaj (volunteers sent for helping and guiding the pilgrims in the holy sites) and another 500 towards Government quota. The remaining quota will be distributed across all the states and Union Territories which is customarily done on the basis of proportion of Muslim population.
4 The pilgrims will be selected by Qurrah (drawing of the lots). In case there are surplus seats, some states such as Bihar, West Bengal, Assam generally have lesser number of applicants than the number of pilgrims allowed under the quota for these States.
5 Of the surplus seats, 500 seats will be utilised for Mehram. In case, more seats than 500 are surplus, upto 2,000 seats will be allocated to the State of Jammu and Kashmir as a special measure. If still some more seats fall into the surplus category, these will be distributed among those State and Union territories that have received 500 or less Haj application forms, but have not been able to satisfy all the applicants.
6 The women above 45 years of age, intending to perform pilgrimage, but do not have a male Mehram, will be allowed to travel in groups of four or more women.
(Note: Male Mehram is one who cannot marry a woman in any situation, such as father, brother or son.)
7 a; The Haj Committee of India should have only one category of accommodation.
b: All accommodation should be hired in Azizia area of Makkah (which is nearer to Harem) and where large chunks of accommodation are available.
c: Only new and multistoried buildings equipped with all the facilities should be hired.
d: There should be efforts to hire a series of buildings in the vicinity of each other.
d: Buildings with complaints should not be considered for hiring in the subsequent Hajj season. Brokers and agents should be avoided while hiring.
e: The HCoI can take into account the maximum hiring rate for fixing the Hajj charges. But the Hajis could be refunded the excess amount, if any, after the hiring and accounting has been done.
f: While hiring the building, the HCoI should look for all necessary items of use such as mattresses, pillows, bucket, mug, brooms and wiper and the hiring charges should include them rather than hiring these items separately.

8-Accommodation at Madina
a: All accommodation should be within the first ring road i.e., Markazia area.
b: HCoI should go for open and transparent bidding.
9 The post of Consul (Haj) should be with the Ministry of Minority Affairs. (It is with Ministry of External Affairs now.)
10 The posting of Consul General Jeddah should be finalized in consultation with the Ministry of Minority Affairs and the Annual Performance Appraisal Report of the Consulate General of
India and other officers should be partly assessed by officers of appropriate seniority in the Ministry of Minority Affairs.
11 The Government should pursue the existing subsidy plan for phasing out the subsidy.
12 Embarkation points may be reduced from the present 21 to nine which are: Delhi, Lucknow, Kolkata, Ahmadabad, Mumbai, Chennai, Hyderabad, Bengaluru and Cochin.
13 Suitable facilities such as Hajj Houses be constructed at embarkation points.
14 The Govt. of India should engage with the Govt. of Saudi Arabia and try to get the option of undertaking global tenders for the Haj Charter.
15 During air charter operations, the flights take the pilgrims and return empty and again after 40 days, they fly empty and bring back the pilgrims. It would be appropriate for Ministry of Minority Affairs and the Ministry of civil Aviation to explore the possibility of using the empty flights for commercial activity.
16 A debate is on to privatize the Air India (which currently operates the chartered flights). The Ministry should consider how to overcome the challenge.
17 Before pilgrims disembark at Jeddah or Medina, the airlines must necessarily give an extra food packet to each pilgrim and a bottle of water.
18 It is suggested that global Expression of Interest (EoI) from vessel owners having newer vessels of 4,000 plus capacity be invited who can ferry pilgrims between Mumbai and Jeddah in consultation of Ministry of Shipping and Transport and Shipping Corporation of India. But opinion of the Saudi Govt. should be ascertained to shipping operations and security concern be addressed.
19 Pilgrims should be instructed to carry only standard baggage with proper identification from India. Baggage in the form of bundles, loose items, items tied in bedsheets and those without proper identification tags should not be loaded on the planes at the embarkation points from India.
20 All pilgrims should be accommodated within the traditional boundaries of Mina.
21 Rates charged by the Moallims should be fixed for at least a five-year period.
22 Moallims against whom there are serious complaints, or those who have been non-responsive to the complaints should be blacklisted by the Indian Mission.
23 The coupons for sacrifice of animals should be made compulsory for each pilgrim.
24 The Khadimul Hujjaj should be physically fit and mentally alert and should be properly trained before being sent to Saudi Arabia. A Khadim should be tagged on to 200 pilgrims from the State concerned and should travel to Saudi Arabia before the group arrives there. They should wear sleeveless waistcoat with the Indian colour on top of their normal clothes at all times except when they may be in Ihram. They should mark their attendance in their respective branch office in Madinah and Makkah in forenoon and at night before Isha prayers. They should submit a detailed report to the respective State Haj Committee and the HCoI.
25 The present system of sending a two-member Hajj Goodwill Mission for Hajj each year by the GoI should continue. They should make it a point to inquire into the welfare of the pilgrims, visit the places of stay and learn about the difficulties faced by the pilgrims.
26 Nomenclature of Private Tour Organisers (PTOs) should be replaced with Haj Group Organisers (HGO).
27 The Haj Division of the Ministry of External affairs should develop a portal for online receipt and processing of PTO applications. The manual applications can be done away with for certain specified categories of PTOs.
28 The PTO should be classified under three categories:
A: PTOs having experience of 12 Haj operations or more; average annual turnover of Rs. 5 crore or more from Haj/Umrah operations in the preceding two years. They may be allotted 200 seats.
B: Category-B: PTOs having experience of minimum of five Haj with an average annual turnover of Rs. 2 crore or more in preceding two years. They may be allotted 100 seats each.
C- PTOs having experience of less than five Haj with an average annual turnover of Rs. one core or more from Haj/Umrah operation in the preceding two years. They may be allotted 50 seats.
29 Fixed deposit for the PTOs may be revised as Rs. 50, Rs. 40 and Rs. 30 lakh for Category A, B and C respectively.
30 The infrastructure of the Haj Committee and the State Haj Committees be utilised for the educational and social upliftment of the Muslim community. The Haj Committee Act 2002 should add this provision.
31 The Haj Committee of India should be exempted for Income Tax, GST and local taxes and the air charter service which are hired for the benefit of the pilgrim, be exempted from service tax or GST.
32 HCoI should have a regional office in Delhi in a proper building.
33 The policy does not approve of Haj Committee of India being replaced by Haj Corporation, but recommends that a Haj Corporation be formed and allow it to compete with PTOs in matters of Hajj, Umrah and Ziyarat (of Karbala in Iraq, Jerusalem, Iran etc) and also run a mutual fund based on savings of prospective pilgrims and be sharia-compliant.
The committee had the following members: Convener Afzal Amanullah, Shafi S. Prakar, Qasier Shamim, Kamal Faruqi, and J. Alam.
(Note: The above document has been edited by Islamic Voice staff writer for brevity. Notes have been added in brackets for explaining the existing norms. Several portion meant for Tour Operators have been left out. For fuller version of the new draft Haj Policy, log on to: http://pib.nic.in/newsite/PrintRelease.aspx?relid=171476
http://pibphoto.nic.in/documents/rlink/2017/oct/p201710701.pdf)