Victim of apathy and neglect, the huge, desolate campus of Govt. Madrasa-e Azam in the heart of Chennai has come under adverse notice 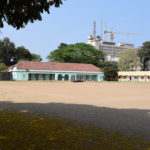 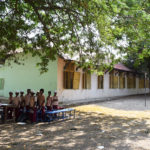 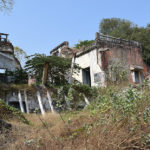 Chennai: The grand campus spreads over 15 acres of prime land in the heart of Chennai. Once upon a time, it used to hum with activity, with a little over four thousand children studying here. Name any prominent Muslim family of Chennai (formerly Madras), it would have someone who was an alumnus of the Government Madrasa-e Azam Higher Secondary School.
But today it bears a desolate look. Situated on the City’s principal thoroughfare Anna Salai (formerly Mount Road), it barely has two hundred students. The decline is too palpable to be missed. Consequently, evil eyes are being cast over the prime real estate, which is ringed by MNC offices on one side, the busy Anna Salai on the other and auto garages on the third. The five-star Connemara Hotel, a heritage hotel, and Spencer Plaza, an upscale shopping mall, are located at a stone’s throw distance. Without collective efforts to address the issue, this famous signpost institution of Chennai may be lost.

Umdah Bagh
The property was once known as Umdah Bagh and belonged to Prince of Arcot, Nawab Azam Jah, and his wife Umdah Begum, who had constructed their royal residence here, a Victorian building with double winding staircases leading up to its majestic balcony and portals. Nawab Azam Jah, after whom the institution is currently named, had set up a school for the children of the royal family in the precincts of Big Mosque in Triplicane. In 1855, a descendant of his, Ghulam Ghouse Khan, widened the scope of the school, shifted it into the current premises and named it after Nawab Azam Jah. Much before Muslims in North India took up modern education, this school introduced the study of English, Tamil, and Telugu besides Arabic, Persian and Urdu. Other sciences were also introduced. The measure was initiated in order to provide forward linkage with higher education being imparted in the Presidency College, located on the scenic Marina Beach. Except for its name, it was a modern school in all senses of the word, with teachers sanctioned by the Government Education Department and salaries being paid by the public exchequer. It was around 1860 that the Nawab entrusted the school and gifted the property to the then Government of Madras Presidency to promote education among Muslims. Teachers included Hindus, Muslims and Christians.

Qaide Millath College
Around 1905, the Mohammedan Arts College was also opened in a part of the premises. It later came under the Department of Collegiate Education. In 1971, it was named Qaide Millath* Government Arts and Science College and was made exclusive for girls. Around five acres of the property were allotted for the college. The then Chief Minister Mr. Karunanidhi assured that the college would provide reservation for the girls from the Muslim community.

Departed Glory
Glory began to depart from the campus as the 1980s set in. According Dr. Syed M. M. Ameen, who now looks after the institution as the President of the Parents-Teachers Association (PTA), prior to 1947 the Government Madrasa-e Azam had around 4,000 students on its rolls. His grandfather, Hakeem Nyamatullah, and father, Hakim Dr. M. M. Khaleefatullah, were enrolled as students of the school in 1943-44 and 1957-58 respectively. Ameen too was on school rolls, during 1980-84.

Setback
The school received a major setback around 1990 as the Anjuman Himayat-e Islam, which runs an orphanage (five kilometers from here) withdrew around 250 children and set up its own school in its T. Nagar premises. Perhaps it had become a necessity as transportation of such numbers posed hassles amid growing traffic on a central artery like the Anna Salai. The institution was left with a mere 70 to 80 students. The relevance of the Urdu-medium too had declined amid growing demand for English-medium education and official impetus for compulsory teaching of the Tamil language.

Alarm Signals
The dwindling strength of students and the vast property sent alarm signals. The PTA set up an orphanage on the premises for children from poor Muslim families to prop up the declining students’ strength. The orphanage could take around 100 inmates. It also constructed four classrooms with funds to the tune of Rs. 18 lakh sanctioned by Mr. Karunanidhi from the Chief Minister’s Fund. The mosque within the premises too was expanded, in 1992.
Though the number of students went up, the decline of standards continued as economically better-off Muslim families opted for English medium schools, mainly privately managed.

Deserted Look
Today, the campus wears a despondent look. The classrooms occupy a mere fraction of the land. Even the existing school building is barely functional. The main building and the façade of the Nawab’s residence collapsed a few years ago. The ruins are sheathed under thick foliage. The watchman warns against moving close to the ruins as snakes abound in the crevices. The old Principal’s bungalow, otherwise an impressive structure, is in a decrepit state. Goats donated for sacrifice for the orphanage browse underneath the trees.
The Muslim community received a rude shock on November 7 when the Tamil Nadu Education Minister Mr. K. A. Sengottiyan descended on the premises with a vast retinue of his staff with a TV channel in tow. Following this, the TV channel started beaming images of the collapsed building and claimed that the school had encroached upon the heritage property.

Bulldozers Sent Away
Following this, PWD bulldozers moved into the campus on the night of December 8. The PTA, which smelt a rat, sent out alarm to a large number of alumni who gathered on the site and forced the PWD to retrace its steps. The PWD authorities however later clarified that it only intended to bring down the unsafe structure to keep the school children from harm’s way.
The PTA members later petitioned the Heritage Conservation Committee and the Chennai Metropolitan Development Authority to rescind its decision. The ruined structure has now been fenced off to keep the children off.

Court Stay
Meanwhile, a PIL in the Madras High Court has resulted in a stay on any demolition or alteration of the status quo of the building till the petition is heard by the Hon’ble Court. Mohammed Abdul Ali has written to the Minister of Education Mr. Sengottiyan to hand over the management of the Madrasa-e Azam premises to the Prince of Arcot Educational and Charitable Trust so that the facilities could be upgraded and new buildings added to run a modern school with state-of-the art labs, computer centre and sport amenities.

Prime Real Estate
It is obvious that years of neglect and underutilization of the huge premises have brought the old institution under adverse notice of the officials. The school, which conducts classes from 6th to 12th grade, has only 210 students on its rolls currently. Though it has a sanctioned strength of 30 teachers from the Government, not more than half a dozen are currently posted. The officials keep poking their noses into its affairs day in and day out. They have barred the current caretakers from increasing the number of inmates in the orphanage and make adverse remarks about the upkeep of the premises. The situation calls for collective action by the bigwigs of the community to think out ways and means to put life back into this institutions which sent out worthies like the late Sir Mohammed Usman, acting governor of Madras; the late Mr. Habibullah Basha, Advocate General of Tamil Nadu; Mr. Mohammed Asif, former Minister; Janab Hamid Abdul Khader, President of Sathak Group of Educational Institutions, Dr. Hakim Khaleefatullah, former Chairman of the Central Council of Research in Unani Medicine, from its portals.
Dr. M. M. Ameen can be contacted on 98409-41038, or 044-28481344.