Lessons From My Recent Trip to the USA

This age has given us many freedoms. It has also given us immense opportunities. Wise planning means recognizing these many opportunities-opportunities in various fields, including in business, social work, education and dawah or inviting people to God. 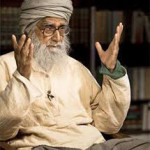 Recently, members of the Centre for Peace and Spirituality, including myself, went on a two-week trip to the USA. We left New Delhi on 26th August 2015 and returned on 9thSeptember. The trip was at the invitation of one of the largest Islamic organizations in the USA, the Islamic Society of North America (ISNA). They were holding their convention in Chicago, to which we were invited. Besides Chicago, we also visited Washington DC, Pennsylvania, and New York.
During this trip, with God’s grace, I got to speak at different venues and to meet many people from different walks of life and backgrounds. At the ISNA convention, there was one point in particular that I stressed: that today we are living in the ‘Age of Peace’. The Age of Peace is the title of my latest book, which was released during this trip at the ISNA convention as well as at the United States Institute of Peace, a centre set up by the US Congress in order to promote peaceful methods of conflict-resolution.
There is a hadith, full of wisdom, that I cited in relation to this Age of Peace that we are living in today. The Prophet is reported to have said: Ala al-aqil an yakunabasiram bi zamanihi. (Ibn Hibban). From this hadith, we learn that wise is he who understands the age in which he lives.
This hadith reflects the importance of something that is really crucial”the need for wise planning. Only if you properly understand and appreciate the conditions of your times, can you engage in wise planning. Planning is about availing the opportunities afforded by the age in which you live. If you have no idea about the conditions of your times, you cannot avail the opportunities that they make available.
In my address at the ISNA convention, I stressed that one special characteristic of our contemporary age is freedom”total freedom. Before this, the world never enjoyed total freedom. One major reason for this was because much of the world was then under monarchical rule, when only the monarch enjoyed total freedom while everyone else were his subjects. But today, we live in a very different age, an age of democracy, an age where it has been accepted that each individual has the undeniable right to be free. There was no such freedom in the past. When the Prophet was in Makkah, the early Muslims were prevented from praying at the Kaabah. Today, in contrast, there is no such restriction on people praying. Muslims and everyone else can pray anywhere in the world you like and no one is going to stop you. Isn’t that amazing! The Prophet and his companions had to face opposition when they wanted to worship at the Kaabah, and today Muslims are free to build mosques in every country and worship there, without any problem. This is freedom, the freedom that we now enjoy in this new age.
If, in line with the message of the hadith referred to above, you want to understand today’s age, you must keep in mind that one basic feature of this age is freedom.

The Quran is the basis of our mission.
In the Quran, God says: ‘Read! Your Lord is the Most Bountiful One who taught by the pen’ (96:3-4). In earlier times, this was possible only in a limited way. People used to write out texts by hand, and that took much time and effort. When I was studying in the madrasa, I once copied out an Arabic course book by hand! But today, in our age of the printing press and the Internet, you can produce and disseminate books at the touch of a button, and on a massive scale. This is one of the many blessings of God that have appeared in this age. Another such blessing is that no matter what your background or educational qualifications, you can devote yourself fully to dawah work. This is such a mobile age! People are constantly moving about today. You interact with many people every day. You can keep dawah-related literature with you and distribute it to people you meet. That’s an easy way to do dawah work. We should be grateful that God has blessed us with so many opportunities to do this work in this age.
Wherever I travel”and this happened in America on our recent trip as well”I meet people who are searching for a message that addresses their minds. A message that addresses their innate nature. A message of spirituality. A message that has nothing to do with political wrangling and conflict. A message free of hate. Everyone seems to be searching for this. But only God can satisfy this inner thirst. And that indicates the importance of dawah, of inviting people to God.
The 20th century was an age of ‘social movements’, among Muslims and others too. There was an explosion of such movements all across the world. But all of them somewhere got stuck in politics. And where politics appears, protest, complaint and hate inevitably raise their ugly heads. These things are not innate in human beings as created by God. Rather, they are fomented by ambitious, power-hungry leaders.
Today, people are thirsty for peace, for spirituality, for positivity. An entire century went off, full of political talk, of hate talk. But today, in the 21st century, people want all this to be dumped”all talk of politics, of hate, of violence. They are looking for what their innate nature wants. I see this wherever I go. If the 20th century was an age of hate, of politics and of confrontation, our age is”or can be”truly ‘The Age of Peace’.