Whatever happened in the past, religious-based violence is real in modern India, and Muslims are frequent targets. It is thus disingenuous to single out Indian Muslim rulers for condemnation without owning up to the modern Valences of that focus. 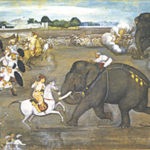