Islamic Voice 0 January, 2017 12:00 am
Religion and Peace-Building Hope From a Historic Conference
Farha Naaz Parveen
The Vision of Peace

Dr. Faizan Mustafa, Vice Chancellor, NALSAR University of Law, Hyderabad, delivered a lecture at a colloquium on ‘Gender Rights of Women in Islam and Indian Law’ organized by the Association for Protection of Civil Rights (APCR), Karnataka Chapter, at the BIFT Hall, Darussalam, Bengaluru on Human Rights Day on December 10, 2016. The colloquium was presided over by Mr. Atharullah Shariff, Patron of the APCR. Mr. Niyaz Ahmed, Secretary, proposed a vote of thanks.
We hereby reproduce some selected highlights of the lecture: 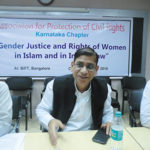 The Universal Declaration of Human Rights (UDHR) says all citizens are born free and with equal dignity. This forms the bulwark of gender equality, just as it provides the basis for equality of citizens before law. Article 16 of the Indian Constitution provides for reservations for members of the underprivileged class or community despite the Article guaranteeing the equality of opportunity in matters of employment or appointment to any office under the State. The Muslim Personal Law takes a cue from it and it is generally understood that the State would not amend such Personal laws unless and until the communities to which it pertains do not demand a change.

Erroneous Impression
The survey of the Muslim women (as quoted by certain politicians) by the Bharatiya Muslim Mahila Andolan (BMMA) has created the erroneous impression that talaq (divorce) and halala (marriage of a Muslim woman with her previous husband by obtaining divorce from a husband she had married in the interim period) has high incidence among Muslims. After carefully going through the survey, it has been revealed that in 71% cases, it was the women themselves who had sought divorce from their husbands, and it was not unilateral and arbitrary divorce pronounced by the men. Let it be known that it was Islam which primarily introduced the concept of divorce for women to seek liberation from a man with whom her marriage was not working. Even in the United States law, only ‘a fault’ could be the basis of a divorce. Only after 1950, the US law introduced ‘no fault’ clause for seeking divorce. Still later, ‘matter of choice’ was also recognized for being a basis of a divorce.
The BMMA survey had asked the respondents to mention their sects and the choice of jurisprudence. Options given there under were Jamaat-e Islami, Tablighi Jamaat, Ahl-e Hadith etc. Are these sects and schools of jurisprudence? One may well ask and it reveals the shoddiness with which the questionnaire has been framed.

Diverse Interpretations
The All India Muslim Personal Law Board has said that three talaqs in one sitting are highly despised under the Sharia. Any reform in the Muslim Personal without ulema on board will not be likely to affect any material change. For people to follow laws in matters of marriage etc, it must carry religious legitimacy. Reforms are not a one-time event.

Divergences
Several myths prevail regarding the Sharia. The British colonial administration resorted to translation of Hidaya into English only when it found that there were several sectarian practices when it came to laws pertaining to marriage, divorce and property distribution. There used to be utter confusion over judicial pronouncements. Due to these variations, the Muslim women were compelled to convert to other faiths to get their marriages annulled. The ulema therefore thought it was better to get the Muslim Personal Law enacted by the Parliament in order that the women get liberated from their broken-down marriage without leaving the fold of Islam. It is time for us to adopt a broadminded approach, or else it would be the Courts that would be deciding the cases of divorce.
We must not say that three talaqs become binding when uttered in a sitting. What we need to is that Muslims should approach talaq the way Quran describes it.
Equal treatment is not equality. Being different does not mean being unequal. Uniformity is not a great value. The Constitution has kept Muslim Personal in concurrent list. Don’t get emotional. Even if Uniform Civil Code were to be enacted, the heavens are not going to fall. It will also strike at the Hindu Marriage Act; it will affect ‘Kanya Daan’ too. Under the Uniform Civil Code, women will not be donated by parents or guardian. Islam recognized the women’s individuality. The current situation and controversy has come about because the judges are skeptical that the Muslim Personal Law Board is not keen to reform. We must not teach law to the judges.