Roshan Baig – Is he joining the Rat Race for the Top Post?

Islamic Voice 0 March, 2015 12:00 am
A ‘Little’ Initiative That Could Go A Long Way!
A Call for Self-Scrutiny
Religion and Peace-Building Hope From a Historic Conference 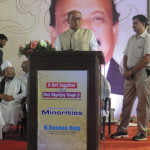 The convention marks a new phase of gutsy politics and the rat race has already begun in the State. Mr. Baig is attempting something that never evoked such an attempt previously by a Muslim politician.

Bengaluru: Karnataka Minister R. Roshan Baig convened an interaction for minorities (read Muslims) with veteran Congress leader Mr. Digvijay Singh on February 21 in the city. As far as numbers go, the meeting was a considerable success as Muslim functionaries within the Congress drawn from every conceivable corner of the State, made an impressive beeline to be seen at the convention.
But one would like to ask as to what Mr. Roshan Baig is up to. Having been elected to the Karnataka Assembly for six terms and having been a member of the cabinet at least five times, Baig is undoubtedly the senior most MLA and Muslim minister. Congress fortunes have waxed and waned in the State during the last six decades. But Mr. Baig has remained a fixture in the Assembly (although he represented the Janata Dal during 1994-99 tenure).

Nascent Stage
It is quite natural for a senior minister of Mr. Baig’s standing to even be an aspirant to the chief ministerial post by virtue of seniority. After all politics is not all about success of the ideology. Ideology takes a back seat these days and self-promotion should not be discounted. If one could remember, Mr. Siddramiah (who was then in Janata Dal) had organized a rally by co-castemen i.e., Kurubas in 1994 around Vidhana Soudha when Deve Gowda was slated to be the chief minister. Going by those yardsticks, the convention by Mr. Roshan Baig was highly dignified. But the major question that it left for answer was: Is Mr. Baig throwing his hat into the ring for the chief ministerial position for the next term? It can be guessed that the attempt, nascent though, is being made.

Muslim Leader
It is fair to speculate that Mr. Baig has begun erecting the ladder even halfway through the current tenure of the Assembly. The convention succeeded in projecting him as the most important, if not the sole, leader of the Muslim minority in the State. Curiously, the other Muslim minister i.e., Qamarul Islam was conspicuous by his absence. Yet another minister, Mr. U. T. Khader was seated on the dais, but no reference was made to him while welcoming. Prominent city MLA N. A. Haris too was either not among the invitees or chose to stay away. The convention may be the most primary step towards the goal which Mr. Baig cherishes for himself. How he proceeds is something to be watched as Muslim representation in the Assembly has never been substantial enough to lend support for aspirants from among them to the top chair in the State. Baig’s future strategy may perhaps target more social components to make a solid case for himself.

Not Palatable
Though Mr. Digvijay Singh spoke impressively as he always does”he has the reputation of being a loose cannon firing salvos at rivals right, left and the center”the interaction from the gathering was nothing of the sort that could be written about. Perhaps by deploying volunteers for disciplining the crowd, a better show could have been put up. But this required much prior planning and training. Similarly, Mr. Digvijay Singh’s suggestion for creation of a cabinet committee on minority affairs should be seen as far from being viable. In presence of an entire Ministry for Minority Welfare, the suggestion is neither sagacious nor palatable. No wonder then why a Muslim MLC from the Janata Dal ranks, pooh-poohed it.
More curiously, Daily Salar and the Rashtriya Sahara carried the convention report supplied by an advertiser rather than their own reporters’ version, on the front page. Salar even carried the credit to the advertising agency. Photographs, headlines, placement and the wordings of the reports appearing in the two dailies in their issue dated February 22, left little doubt about their origin, i.e., a publicity outfit behind. This is not unusual for the Urdu dailies. But this only conveys the reluctance on the part of the Daily Salar (currently owned by the Trust headed by former Union Minister Mr. K. Rahman Khan) to lend due weightage to the news of the convention.
All said and done, the overall impression is that the convention marks a new phase of gutsy politics and the rat race has already begun in the State. Mr. Baig is attempting something that never evoked such an attempt previously by a Muslim politician.