US Embassy Shift to Jerusalem – Where Do We Go From Here?

Trump’s America has made its intention plain. European states may follow the American footsteps soon. 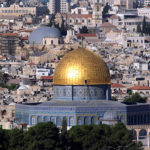 The US move to shift its embassy from Tel Aviv to Jerusalem has reset the Mid-East political and diplomatic chessboard. Since President Trump’s announcement of the decision on December 6, it has become quite clear that this decision has tacit support of some influential players in the region even though they have come up with statements supporting the Palestinian cause. The UN General Assembly has condemned it with a large majority and earlier a Security Council resolution was vetoed by the US although 14 out of 15 members backed it.
Without mincing words, let us state clearly that if the Americans go ahead with their plan, quite a few European states (who are opposing it at present) may follow in Trump’s footsteps as is evident from their past behaviour. And, Americans will certainly go ahead with their plan knowing well that Arab and Muslim world stand deeply divided on every issue under the sun.

Art has an Eternal Relevance
So, the question is: where do we go from here? Before moving further on the issue, I am tempted to quote two short snatches from the poet Iqbal, unrelated to each other, but nicely encapsulating the Ummah’s predicament, including Yours truly’s. One short clause from a poem addressing Indian Muslims says: teri barbardiyon ke mashwire hain aasmanon mein (the heavens are plotting your ruin). The other, not related to this poem, reflects the Ummah’s bewilderment today: Pas che bayad kard aiy aqwaam-e-sharq (so, what do we do now, O peoples of the East?).
Art has an eternal relevance. Iqbal’s poetry being canonical, has relevance in today’s situation.
So, having consoled ourselves with the best of our literary heritage, let us be a little realistic about what could be done about Palestine, the Haram in Jerusalem, other Islamic heritage on the 250 acres of Haram complex, the future of the Palestinian people and their future capital under the two-state solution peddled so far by the Palestine Quartet.

Equal Citizens with Jews
Early murmurs in the grapevine are indicating, among other things, a single-state solution, that would be Israel, including West Bank, Gaza and East Jerusalem. Will the Palestinians be equal citizens with Jews? Nobody can guarantee, because East Jerusalem’s Palestinians have been stripped of their citizenship years ago and they are given only residence passes, to be renewed periodically. Their living areas have been surrounded by Israeli settlements and Israeli military camps. Their freedom of movement has been severely restricted. They have to seek permission of military authorities if they want to go out of East Jerusalem. Their permits are cancelled and they are expelled if they overstay with family, relatives or friends outside East Jerusalem.
If it is going to be a two-state solution, where will be their capital? Knowledgeable circles say their capital will be in Ramallah. The Arab and Muslim world will have to think seriously if it is Ok with them. But will the three lakh Palestinians in East Jerusalem get back their citizenship, even if it is Israeli citizenship? And what will happen to free Arab and Muslim access to the Haram complex? Will the holy mosques of Isra and Aqsa, besides hundreds of cultural artefacts and buildings, be protected? Arab and Muslim leaders must clarify.
Now that the Mid-East chessboard is re-set, will the families of 750,000 Palestinians chased out of Palestine in 1948 get the right of return to the holy land? So far, Israel and its backers”the US, the UK and European Union”have denied Palestinians the right to return even though Jews living in Europe, Asia and Africa for generations after generations have got this right. So, can’t they get this right even now?
In the talks held so far over the decades, a primary agreement of sorts was reached that Palestinians who choose not to return and continue to live in other Arab countries, Europe, North and South America will get compensation for their exile, their homes, fields, gardens and orchards misappropriated by Israel. What is the latest position on them? Will the major Mid-East players explain it?
So far, throughout the peace talks over the decades, the finalisation of the status of Jerusalem and its boundaries were scheduled for the end-stage talks. If major Mid-East players back the US plan, can they tell the Ummah what the Palestinian Arabs, Muslims and Christians, will get in return? The terms of the bargain must be explained for the stake holders to decide with clarity of mind. Arab and Muslim leaders must clarify things before the general resentment mounts.
(The writer is Chairman, Institute of Objective Studies, New Delhi).