There is no scope in God’s world for randomness and sudden events, unlike what scientists may claim. Every action has a cause and effect. 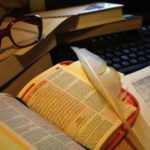 Many Muslims today might be offended by the statement that the Quran wants people to use their powers of reasoning and intellect. For such Muslims, faith should be blind, followed with emotion and demonstrated through traditions established by clerics and forefathers.
The Quran specifies that the only characteristic that differentiates humans from animals is one of rationality (aql):
“For the worst of beasts in the sight of Allah are the deaf and the dumb “ those who understand not” (8:22).
The Quran asks people to ponder deeply over the signs in the universe: the sun, moon, stars and the relationship with the earth; the changes in weather, rain and its effect upon food production; the creation of species including humans and their interrelationships. There is a system that is working in the universe and it has been put to the use of humankind so that the latter may benefit or be harmed, according to its own deeds.

Islam Encourages People To Ask Questions.
Had God wished, He could have demanded complete and immediate faith, without providing arguments that relate both to the mind and to the heart. However, He preferred to give freedom and choice based on the exercise of intellect and will. He presented reasons for and wisdom behind all His instructions and demonstrated that evidence is essential for any truth to be proven (10:100; 2:111; 21:22). He wants humans to reflect, deliberate, and ponder before any belief or action.

Cause and Effect
There is no scope in God’s world for randomness and sudden events, unlike what scientists may claim. Every action has a cause and effect, as described by God when He asks people to learn from the history of previous nations.
The fate that befell them was a result of their chosen actions, and if people would learn this lesson, they would avoid such mistakes. “Do they not travel through the land, so that their hearts (and minds) may thus learn wisdom and their ears may thus learn to hear? Truly it is not their eyes that are blind, but their hearts which are in their breasts” (22:46).
The Quran encourages people to ask questions, provided they do so with sincerity and the desire to understand the truth. The Quran answers every one of these questions, patiently and consistently (21:7).
Just as God has given us rationality, so has He limited the powers of the human mind. Some matters transcend the human powers of reason and logic, and the recognition of such limitations is also a result of human rationality:
“And pursue not that of which thou hast no knowledge. …” (17:36).
Ayatollah Murtadha Mutahhari, the famous Iranian scholar and philosopher, states four reasons for errors in reasoning by human beings, as given in the Quran.
The first is our failure to adopt a neutral and objective stance and, instead, basing our beliefs on heresy and assumptions.
The second is to follow the beliefs of others, particularly of one’s forefathers or those whom one assumes to be more knowledgeable, despite knowing that everyone is responsible for one’s own beliefs and must reflect and think for oneself. People, especially today, are ready to accept traditions, customs and practices without question, giving them the status of religious sanctity.

Search for the Truth
The third reason for error in reasoning is to be swayed by emotions, personal desires, whims and motives so that the search for the truth becomes obscure.
And the fourth is a “sickness of the heart”, the corruption of the human self through continuous exposure to and delving in sinful acts without any retrospection and penance.
If rationality and evidence are emphasised to such a degree in the Holy Book, to claim inconsistency with science is in itself contradictory. All knowledge that seeks to answer questions that is proven through experimentation and used for human benefit is exactly according to God’s scheme for the world.
But should religious edicts be mixed with science, and time and effort expended on trying to extract scientific facts from sacred texts? Religion “ especially as emphasised by Islam and the Quran “ has come for spiritual purification and is not meant for other ends, except where there may be a direct link with morality. Religion must not be used to alter scientific facts and vice versa. There is no scientific evidence against any divine truth revealed by God.
Our beliefs must be tested on the scale of our rationality, provided we are humble enough to understand that it has limitations. Our soul manifests itself through our conscience, which recognises the truth even though we may not use our six senses.