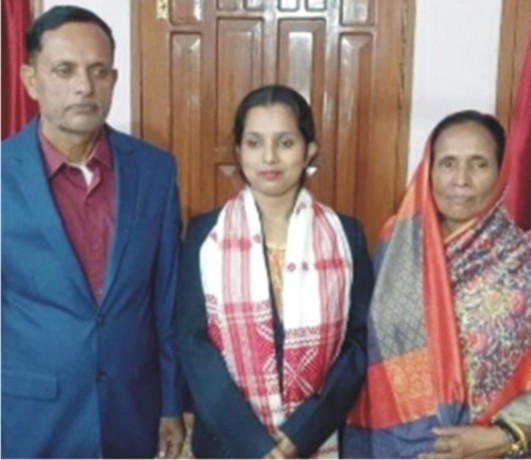 Interview of Nazneen Yasmeen a girl from a small town Meheeripar, Assam, her physical weakness did not became obstacles in the way to success.

After completing her M.Tech, Yasmin enlisted her name and took help of a scientist friend & did a Google Search on how to become a rocket Scientist..?

Her dream came true soon she will join as a Junior Scientist at the Indian Space Research Center.

In an exclusive interview with Inquilab Nazneen told that My early educational journey started from “Kadamoni Town High School (Assamese Medium)”, Succeeded 10th in 2007 with 75% marks. Due to my interest in Science, I entered Alpha Beta College of Science, from where I passed 12th Science exam in 2009 with 70% marks. Nazneen graduated from Guwahati University.She obtained B.Tech degree in Electronics and Communication Engineering from NITS Mirza College with 71% marks and then in 2016 Completed her M.Tech. degree in Electronic Design and Technology from Tezpur University with Grade “A”.

Naznin told that Kalpana Chawla is an Indian-born astronaut, became my role model when I was in school. She embarked on a space, as a child like others, I was too happy. Unfortunately, during returning journey her shuttle was crashed, but by then, journey had created a new hope in the hearts of little buddies like me.It was during my school days that I started dreaming of space traveler. I got inspiration from Kalpana Chawla Earlier, when I was very young, whenever I saw and heard the sound of a Plane, Rocket & fighter plane in the sky I used to ask several questions to my mother eg. What is all this? Where do they go? Who flies them? Since then I had decided that when I will grow up, I would do the same. Then, I focused on my studies and completed my B.Tech & M.Tech.

After completion my Engineering, I tried for Engineering Services, qualified for UGC Net GRF exam & also eligible for PhD Fellowship but instead of getting the position of Assistant Professor, I eager to complete my childhood dream. I planed to achieve my goal & started working hard with acquiring the knowledge of becoming a scientist in ISRO. One of my fellow scientists helped me a lot to do the same. To get information about exams & accurate knowledge to go to ISRO, I started Positive used of internet.

In 2019 I had appeared for ISRO written test, after which I was called for an interview on 11 August 2021 at the North East Space Application Center in Shillong. During the interview in ISRO,the panel asked me “Why do I want to join ISRO?” In response, I said,”I want to fly a rocket.” I worked hard and now, thanks to God, I have been selected as a junior scientist in ISRO. Inshallah soon, I will join as a scientist at ISRO Headquarters, Sri Hari Kota, Andhra Pradesh before December 30, 2021.

In her message to the students, Nazneen said, “I belongs to a small town which is lack of facilities and a backward area. Since my child hood I didn’t get any modern facilities which a child from urban area used to get, yet I would like to give full credit of my success to my parents, siblings and husband. I was a hearing-impaired girl by birth. My parents gave me medical treatment which made me able to hear and speak. Here am speaking to you through a hearing aid. I had trouble in speaking so I was admitted to school with my younger sister. I did not allow my physical defect to overcome me. I worked hard and succeeded with good marks. I can never forget my teachers who had faith in me and gave me a chance to soar. In this journey of education, at every entry point, till now, someone became my mentor and helped me to work hard. I always get success with good marks in the class. My parents gave me such an environment that I never felt as a weak child, and even during higher education I kept trying to achieve excellence in my subject. I have always been accustomed to reading by myself. I would like to message the students that, you should set the target and goal in your life, focus on it, keep on trying, keep on mastering it, by knowing your strengths and make it your identity. Keep working, don’t think about from where you belongs and what will happen with you, think positive. No matter what kind of situation you face, insha’Allah you will get success surely.”

Nazneen said about her family that “My father’s name is Abul Kalam Azad & mother’s name is Manzeela Begum. My father is an arts graduate & mother is a science graduate. My sibling sister Shamima Yasmeen have also obtained MB degree after B.Tech. She is an Entrepreneur. My husband’s name is Saheed-ul-Islam.He has an M.Tech degree & has been working as an oil test maker in a petrochemical firm in Badmer, Rajasthan.

Nazneen fathers & her sister Shamima praised Nazneen’s skill and hard work in her subjects they told that our family is proud and very happy about her success.