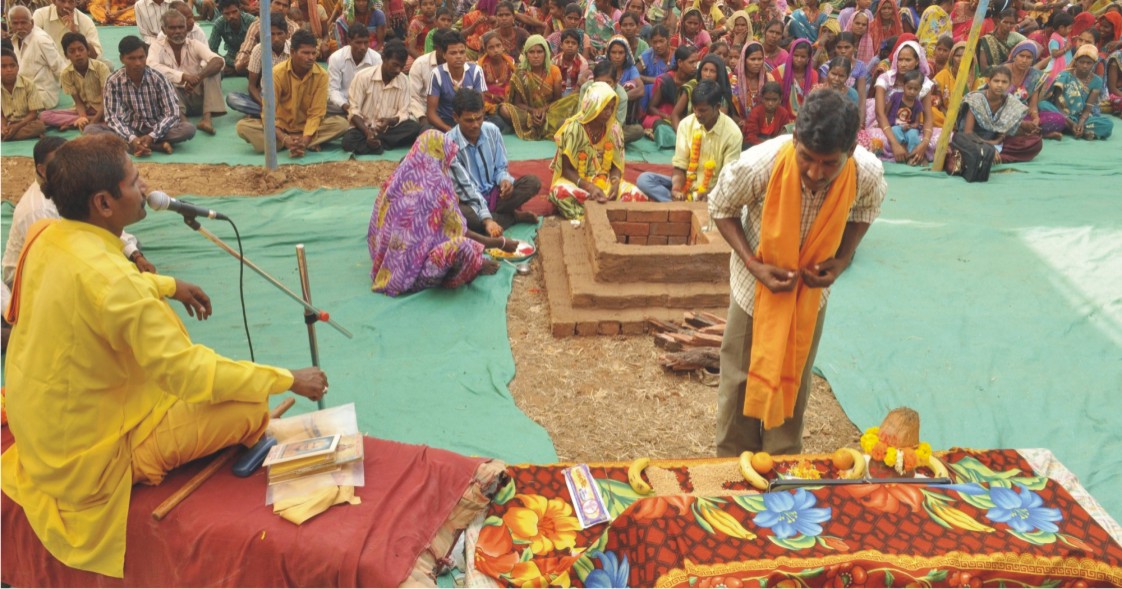 US-based Pew Research Centre has blasted the myth of so-called ‘conversion conspiracy’ in India, saying “religious conversion is rare in India, and Hindus gain as many people as they lose” through conversions.

NEW DELHI Several radical Hindu groups are politicizing the religious conversions and converting them into a poll issue when the assembly elections in politically crucial Uttar Pradesh and Punjab, Himachal Pradesh, Manipur, and Goa are just a few months ahead.
But the US-based Pew Research Centre, in its report on June 29, has blasted the myth of religious conversions in India.
Pew Research has said that the religious conversion in India is very occasional. The research findings reject the Hindu group’s claim that a large-scale conversion is taking place as a part of a larger conspiracy to change India’s demography from a Hindu-majority to a Hindu-minority state.

Conversion is rare in India, but Hindus also gain
Admitting that the religious conversion is undoubtedly taking place in India, but the Hindu religion also gains through proselytization, the report says, “Religious conversion is rare in India, and Hindus gain as many people as they lose” through conversion.
At the same time, the Pew study has found that “religious switching” has “a minimal impact” on the size or population of the religious groups.
According to the survey, if some people have movements out of one religious group due to faith conversion, there is also a switch-over into the same religious group from other religious communities. Thus, the total overall size of the group remains almost stable.
While some state governments have framed laws against proselytization owing to the propaganda of large-scale conversion of low caste Hindus, especially to Christianity, the Pew study finds “any conversion out of the (Hindu) group is matched by conversion into the group”.
“Among Hindus, for instance, any conversion out of the group is matched by conversion into the group: 0.7% of respondents say they were raised Hindu but now identify as something else, and roughly the same share (0.8%) say they were not raised Hindu but now identify as Hindu,” the report prepared by Jonathan Evans and Neha Sahgal says.

Muslims don’t gain through conversions in India
In the case of Muslims, the report says that 0.3 percent of respondents said they were not born Muslims but now identify themselves as Muslims. Almost an equal number (0.3 percent) of Muslims have left Islam and identify themselves with some other religions. In totality, there is no net gain in the size of the Muslim community in India despite conversion because of the reverse proselytization.

Christians have gained through conversions
However, in the case of the Christians, the report admits there are some net gains in the size of the Christian community through conversions. This is because some Christians were born in Christian families but have now converted to other religions.
“For Christians, however, there are some net gains from conversion: 0.4% of survey respondents are former Hindus who now identify as Christian, while 0.1% were raised Christian but have since left Christianity,” the report claims.
The report is based on the survey conducted between November 17, 2019, and March 23, 2020, among adults in different cities across India.

No significant change in country’s demography despite conversion
Overall, the report’s findings say there is no significant change in the country’s demography through proselytization. Yet, some radical Hindu groups raise a lot of noise, accusing the Muslims and Christians of indulging in the conversion of the members of local Hindu communities, particularly the poor and Dalits, through what they call “fraudulent” means and offering them a lot of temptations, including monetary benefits.

Hindu Radicals groups float the thesis of baseless “Love Jihad”, forced conversion to malign Muslims and Islam
Under pressure from the Hindu groups, several state governments have also enacted harsh anti-conversion laws that are often misused to prevent interfaith marriages, mainly if the bride happens to be from the Hindu community. Several cases have been lodged in police stations in Uttar Pradesh, particularly against Muslims recently, accusing them of using “fraudulent” means to convert hundreds of Hindus to Islam. The case of a Kerala-based woman Akhila Ashokan ala Hadiya, a homeopathic doctor, who converted to Islam in 2016 and married Shafin Jahan, a Muslim, attracted international headlines when the Kerala high court annulled their marriage, calling it a case of “love jihad” or forced conversion, based on the National Investigation Agency (NIA) report. The NIA had called Hadiya a victim of “indoctrination and psychological kidnapping.” “Love Jihad” is a term coined by right-wing Hindu groups alleging a Muslim strategy of converting Hindu women through seduction, marriage, money, or threat.
After the cancellation of the marriage, Hadiya was sent to her parents. However, the Supreme Court restored Hadiya’s marriage with Shafin Jahan and ordered she be sent to her husband. Hadiya alleged that when she was sent to her parents on Kerala High Court order, Shiv Shakthi Yoga Centre, a Hindu group, visited her at her father’s request and allegedly tortured her to reconvert her to Hinduism.

NIA Investigates, says “Love”, but no “Jihad”
While hearing the Hadiya case, the Supreme Court had also asked the NIA to investigate any conspiracy behind conversion in Kerala. Out of as many as 89 cases of conversion in Kerala in which Hindu girls had married Muslim boys, the NIA picked up 11 cases and did not find that women were coerced to convert in any of these cases. It found that there was “love” in these marriages but no “jihad.”
Supreme Court Rejects PIL on false allegations of “forced conversions” in Haryana’s Mewat
Recently, efforts were also made to create tension in the Muslim-dominated Mewat belt of Haryana, levelling allegations that Muslims were trying to convert local Hindus to Islam, and a public interest petition (PIL) was filed in the Supreme Court for action against “forceful conversions of Hindus.” But a three-judge bench of the Supreme Court headed by Chief Justice NV Ramana rejected the PIL, observing the court cannot entertain a petition merely based on newspaper reports. Nevertheless, a persistent demand is being made to bring a federal law against conversion. Several Hindu groups have opined that the Hindus are likely to lose the majority if conversion is not stopped. They believe that the Hindus will lose their grip over political power in case they lose their majority.

No SC status/rights to Dalit converts to Islam, Christianity: Law Minister Ravi Shankar
As conversion has always been contentious in India, India’s federal or central law does not grant Scheduled Caste (SC) status to Dalits converting to Christianity and Islam. As a result, after converting to Islam or Christianity, Dalits lose all benefits as available to them in the Hindu religion. This was made very clear by Union Law Minister Ravi Shankar Prasad while replying to a question from his party colleague GVL Narasimha Rao in Rajya Sabha, the Upper House, in February 2021. However, Prasad said that if the Dalits adopt Hindu, Sikh, or Buddhist religion, they will receive all benefits available to them as a Scheduled Caste (SC), including contesting elections from SC reserved seats and reservation in government jobs.
In his reply, Prasad quoted Para 3 of the Constitution (Scheduled Caste) Order 1950, which says, “…..no person who professes a religion different from Hindu, Sikh or Buddhist religion shall be deemed to be a member of a Scheduled Caste”. Thus, the Constitution’s provisions and the minister’s statement in Parliament clarified the distinction between Dalits adopting Hinduism, Sikhism, Buddhism and those choosing to convert to Islam or Christianity.

If the temptation of money is among “fraudulent” means for conversion, what is the reservation offer in jobs to Hindu, Sikh, Buddhist Dalits?
The Indian Constitution, thus, discourages Dalits from adopting Islam and Christianity because they will have to surrender benefits if they quit Hindu, Sikh, or Buddhist religion. Suppose the temptation of money, better lifestyle, and salvation in the life Hereafter is considered among “fraudulent” means for a person to convert their religion as incorporated in anti-conversion laws passed by different state governments, and it is also punishable as per religious conversion laws. Why not the offer of benefits of reservation to one to continue as Hindu, Sikh or Buddhist Dalit should also be considered “illegal temptation.” Why should it not be removed from the Constitution? But the minister (Ravi Shanker Prasad) made it clear in his reply that there is no question of amending this part of the Constitution to give SC status and rights to Dalits converting to Islam and Christianity.
Meanwhile, the National Council of Dalit Christians has filed a plea in the Supreme Court demanding the removal of Para 3 of the Constitution (Scheduled Caste) Order 1950 that denies Scheduled caste status and rights to Dalits having converted to Christianity.