Yoga is Ok, Yoga-Politics is Not

Islamic Voice 0 July, 2015 12:00 am
Voices Against Terrorism
Muslim Discourse – There is a Need to Reverse the Narrative used by Extremists
Not Educated In Islam 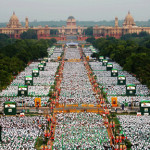 The Darul Uloom Deoband, has said that for Muslims, yoga is good enough, minus practices like Surya Namaskar and Om chanting. This stands to reason even though yoga’s genesis lies in ancient Hindu milieu.

On its own, yoga is like any other system of exercise that promotes physical, mental and emotional wellbeing. Despite its origins in a Hindu religio-cultural milieu, its widely acknowledged “founder”, Patanjli, was said to be an agnostic. Even then, practices like Surya Namaskar (literally, bowing to the Sun), that makes it look like Sun worship, and emitting the Hindu sacred word Om during breathing exercises make it belong to the vast body of Hindu religio-spiritual ritual.
However, there is more to RSS-BJP’s exuberant support of Yoga Day celebrations as has been pointed out by Opposition leaders. They have alleged that behind the Yoga Day celebrations the Sangh was trying to mobilise and indoctrinate people in a jingoistic way against non-Hindus. Attention has been drawn to provocations like those the BJP MP Adityanath, an uncouth oaf with a foot-in-the-mouth affliction, likes to make against Muslims. This man declared recently in a grand, magisterial way, “Those who refuse to do Surya Namaskar must go to Pakistan.”

Communal Flavour
Certainly, it is a remark against Muslims, who cannot engage in Sun worship or snake worship, or any other worship, except the worship of Allah. It is in moments like this that the ulterior agenda of all things emanating from the Sangh becomes clear. They try to infuse even an innocent thing like yoga with a mischievous spirit. As I said, on its own, nobody has an objection to yogic exercises if things like Surya Namaskar and chanting of Om are not imposed on monotheists.
In fact, there are many Muslims who do yogic exercises regularly without, of course, resorting to Surya Namaskar and Om chanting. The Darul Uloom Deoband, has said that for Muslims, yoga is good enough, minus practices like Surya Namaskar and Om chanting. This stands to reason even though yoga’s genesis lies in ancient Hindu milieu. Exchange of good ideas between Islam and other cultures is an established norm as indicated practically by the United Arab Emirates, which has marked two days for Yoga Day celebrations, instead of one day by any other country, including India, the home of yoga.
That Islam does not frown at such exchanges is obvious from the widespread use of prayer beads by the devout across the Muslim world, even though the beads originated in the Buddhist ritual. Likewise, the fast on Ashura came into Islam after centuries of its observance in Judaism. The Prophet (Pbuh) introduced it to Islam saying Moses (Pbuh) belonged to Muslims more than he did to the Jews.
Desirable Cultural Exchanges
As it stands, cultural exchanges are fine with Muslims, but politicisation of such things is not. Going beyond all limits of legitimacy and decency, the Sangh has tried to drag the Vice-President of India into the controversy. BJP general secretary Ram Madhav tweeted that Vice-President Mohammad Hamid Ansari’s “absence” from the yoga session was noted. Obviously, it was a slur on the Vice-President, with the sly implication that he had kept himself away from it because he was a Muslim. Naturally, this was noted by leaders of non-NDA parties. Congress leader Jairam Ramesh said, “Communal polarisation is the only thing that Modi, Amit Shah and Ram Madhav know”¦Whatever the BJP and the PM do is aimed at communal polarisation.”
He added, “This obnoxious tweet by Ram Madhav, knowing fully well the constitutional position of the Vice-President, is a deliberate and mischievous attempt at polarisation and at giving yoga a communal flavour.”
Soon the Vice-President’s office clarified that the ministry dealing with the event had not invited the Vice-President in the first place. Minister of State for AYUSH, Shripad Naik, whose ministry was looking after the Rajpath yoga event, apologised for the tweet. He also explained, as the PM was the chief guest at the event, the Vice-President was not invited because his constitutional position being superior to the PM’s, the PM cannot be the chief guest in his presence.

Slander Campaign
This shows not only the constant slander campaign against the Vice-President, but also an attack on the dignity of the second highest constitutional office in the country. And, this is not for the first time they have targeted Vice-President Ansari.
Earlier, on the eve of Republic Day, they spread the rumour that Mr Ansari had not saluted the national flag. That, too, was an attempt to show that as a Muslim, his loyalty to the nation was suspect. In that case, too, the VP’s office explained that the protocol required that he should not salute the flag while the President was doing it.
Recurring attacks on the VP like this indicate that it is not the significance of Republic Day or the value of yoga that is on BJP leaders’ minds, but some ulterior agenda as Jairam Ramesh has pointed out.
———————————–
(The writer is Chairman of the Institute of Objective Studies and General Secretary of the Milli Council).