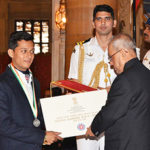 November 3rd was a proud day for the family of Aftab Sheikh, and in fact, his entire neighbourhood in Solapur. The 22-year-old had already brought laurels to this area by becoming the first person to graduate, but on that memorable day, he found out that he was to receive the Indira Gandhi Award for 2015-16 from the President of India, Pranab Mukherjee. This was in recognition of his meritorious services through the National Service Scheme (NSS) for all-round development.
A jubilant Aftab said that the idea of giving something to the society was always strong in his mind. “Ever since I joined Dayanand College in 2014 in Solapur University, I knew that I wanted to work for the society, and hence enrolled myself in the NSS,” he said.
In order to create awareness regarding social service, the NSS was established in 1969 by the Government and implemented at the college level. Under this scheme, colleges out carry different social, educational and health related activities in coordination with students. Aftab said that the award was a recognition and culmination of his various efforts at the local, district, zonal and national levels. “As part of the NSS, over two years every participant has to take part in at least one social camp. But during this period, I participated in about 11 camps and have worked on a range of issues like sanitation, education, health, organising blood camps and even repairing roads,” he said.
Aftab’s zeal to work on social issues prompted him to enroll in Masters in Journalism at Mumbai University. “I want to work as a reporter, so that I can bring out the issues of people, and also bring out the positive stories which emerge from our society,” he said.
(Extracted from twocircles.net)