Babar Ali – A Campaigner Against Darkness

A Murshidabad lad sets up a school for 800 children in a village. 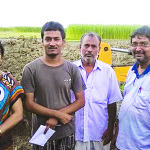 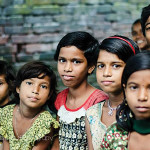 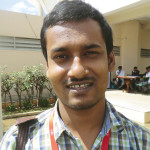 Babar Ali is barely 22 and is the founder of a school. At 16 he was named the youngest headmaster in the world and a role model for the youth by the media. But Babar is simultaneously studying for his Masters degree in English from Kalyani University at Berhampore’s (West Bengal) Krishnath College.
Babar gets back from his college at 2-30 pm, takes his position as the headmaster of the Anand Shiksha Niketan, the school he founded in 2002 in the backyard of his thatched house in Bhabta village of Murshidabad. His father Mohamed Naseeruddin is a jute-seller. Nearly two-thirds of the Murshidabad population consists of Muslims. Illiteracy is rampant. Most children help their families in farming. Yet Babar was privileged in that his father sent him to a regular school where he received formal education.
Tireless Zeal
But even while he was in school, he was pained to see that children of his age had not seen the inside of a school and knew next to nothing about reading and counting. He began to gather the locality kids in an open court in the backyard and teach them whatever he would have learnt in the school. His sister was her first student. Children were happy to learn the alphabets, words and arithmetic. The informal arrangement took a concrete shape in 2002 when he founded Anand Shiksha Niketan (‘Home for Joyful Learning’ in Bengali). The school would begin at 3 pm and continue up to 6-30 pm without a break.

Afternoon School
Some girls who were taught by Babar and had managed to reach degree stage volunteered to teach at his school. Gradually, Babar’s school became popular in the area. Children would return from farms to gather at the school to learn the basics. He also got some help from the Ramakrishna Mission and other philanthropists. Firoza Begum, now an MLA in West Bengal Assembly, who was headmistress of a higher secondary school lent her support and is now the secretary of the managing committee of Babar’s school.
Today, Anand Shiksha Niketan has 300 students and he has also set up another branch of the school in Shankarpada, a village three kilometers from Bhabta. It has drawn as many as 500 students. The two branches of the school together impart education in Bengali medium from first till 8th standard. Half the total students are girls. Seven of the nine members of the managing committee are women. Ninety five per cent of the students are Muslims, but everyone who wants to study is free to enroll. No discrimination is shown to anyone.
Invited by CII
Speaking to an audience of 400 educators at the 16th Summit of Quality Education organized by the Confederation of Indian Industry (CII) at Bengaluru on September 22, Babar Ali told them that Swami Vivekananda was his role model. The Karnataka Government introduced a chapter on him in the 9th standard textbook. Ninety per cent of the emails and help he receives are from Karnataka. Babar said ‘there was painful struggle behind his success story, nothing can stand against determination, insight and zeal.’ He was a special invitee of CII and had flown in from Kolkata.
Babar says teaching was his passion. Quoting Rabindranath Tagore, he says, ‘A guru ignites the mind and removes the darkness from one’s existence’. He urges the youth to take up teaching and light up lives of the people.
Several philanthropists have helped him to construct four rooms, each 23 ft x 16 feet, and some toilets for the Shankarpada School. No fee is charged from the student. However, they have to arrange their books and uniform. He says he is determined to remain a teacher lifelong and would dedicate his life to spread the light of education among the people.