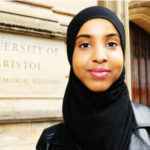 Bristol: The Bristol University has conferred honorary doctorate on Fahima Mohammad, a British citizen of Somalia origin. The 19-year Fahima had been an activist against female circumcision (a tribal practice in Somalia, Eriteria, Sudan, Egypt and some African countries and wrongly attributed to Islam). She has also been campaigning against forced marriages, honour killings etc prevalent among Britons of Indian and Pakistani origin. Fahimah has enrolled for degree course in Kings College, London for a degree in biology this year.
Fahimah migrated to Britain at seven years of age with her parents. She began talking about the orthodox and obnoxious custom at a very young age. She also played the central character in a drama against the custom. Her campaign led to introduction of a law in Britain under which victims of female genital mutilation (FMG) could be reported in the country. The law enacted in 2014 could lead to prosecution of parents or relatives who force the young girls to undergo the circumcision (and also those who do not protect their daughters from such a surgery). They could be jailed for the same.
A report from UNICEF estimates that nearly 200 million have been forced to undergo the FMG around the world, of which 44 million are under the age of 14 and less.