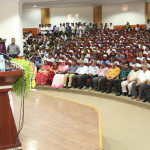 Hyderabad: Dr. Mohammed Aslam Parvaiz officially took charge as the fourth vice chancellor of Maulana Azad National Urdu University (MANUU) on October 20. He has had an earlier stint in MANUU, serving as the regional director at the University between 1998 and 1999. With a PhD in Botany, Dr Parvaiz is also the Director of Islamic Foundation for Science and Environment, a charitable trust established with an aim to undertake studies on the interface of science/environment and Islam and to create scientific and environmental awareness. Parvaiz, an alumnus of Aligrah Muslim University, took charge from Khwaja M. Shahid, who had been working as the incharge vice chancellor since Mohammad Miyan retired in May this year. The new vice chancellor addressed a meeting organized by the Joint Action Committee (JAC) comprising MANUU Teachers Association, Officers Association and Employees Welfare Association. Parvaiz told the faculty, non-teaching staff and students his way will be that of justice. “With me everyone will get justice. We should keep the interests of the university above our personal preferences and work dedicatedly for its growth.” The vice chancellor said that he had been told in certain circles in Delhi that MANUU is plagued with regionalism. “If this is true I urge you to shun it as it would cause hindrance in the growth of the university,” he said. Addressing the students, he said that they needed to work harder and turn in extra excellent performance as the employment market is becoming more and more competitive. “So dedicate yourself to the studies from now,” he said. Prior to his appointment as the vice chancellor, Parvaiz, was principal of Delhi’s prestigious Zakir Husain College, with which he has been associated for the last three decades.