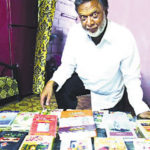 Dr Yusuf Ansari, a resident of Malegaon, has authored over two dozen books in the past two decades which are used by Unaniand MBBS students across India.
By Zeeshan Shaikh

The Unani system of medicine, which was introduced by the Arabs and Persians sometime in the 11th century, is said to be dying a slow death. Though India is still one of the leading countries in Unani medicine today, with a number of educational, research and healthcare institutions, the number of Unani practitioners here is far less than what it was in the past. In Maharashtra, a doctor has been making efforts to make Unani medicine system more relevant and accessible in contemporary India. Dr Yusuf Ansari, a 62-year-old resident of Malegaon, has authored over two dozen books in the past two decades which are used by Unani students across the country. The books are based on the Unani medical curricula laid down by the government. Some of them, like the ones on physiology, surgery and pathology, are also referred by MBBS students.
The system’s beginnings can be traced to the teachings of ancient Greek physicians like Hippocrates, and its principle revolves around strengthening the ‘Quwwat-e-Mudabbira-e-Badan’ (immunity). The foremost book on Unani “ ‘The Canon of Medicine’ “ was written by Avicenna in the ninth century. While Avicenna’s works were followed by other writers as well, the content and language of these books made them a bit difficult for students to follow. “All these books are scholarly pieces, but seeing that many students found these books a little difficult to follow, I attempted to write a book which would be in tune with the contemporary times and would be lucid and understandable for students as well,” Ansari explains.Ansari’s first attempt was a book called ‘Tahafuzz-e-Tibb’, or preventive and social medicine. “The idea was to link the concept of Unani medicine with contemporary medical problems. I wrote the book to make this effective medical form understandable and more relevant. The book, however, was published only in 1996 after which I was asked to write more on the subject,” Ansari says.
Interestingly, Ansari’s primary degree has not been in Unani medicine. Coming from a very humble background, Ansari gained an MA in English, and for a time used to work for Rs. 20 per week. He eventually joined a Unani college as an English language teacher to make ends meet. It was only in his 30s that Ansari’s interest in Unani medicine peaked and he decided to pursue a degree in it at the same college where he taught English.
“Today, this medicinal system is suffering because it is seen to be associated with a certain community. My attempts have been to ensure that people open their minds and see things for what they are really worth,” says Ansari.