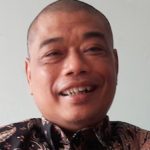 Catholic priest and social activist, Father Antonius Benny Susetyo has a close working relationship with the leader of Muslim-majority Indonesia. In June 2017, he was appointed by President Joko Widodo as an adviser to a loosely structured group promoting communal tolerance and understanding. Sectarian tensions had surfaced earlier in the year during an election campaign for the governorship of the capital Jakarta. Hundreds of thousands of Muslims joined protests against the then incumbent ethnic-Chinese Christian governor, Basuki Tjahaja Purnama. The advisory group that includes Father Susetyo looks for ways to implement Indonesia’s national Pancasila ideology stressing belief in one God and cultural pluralism. Father Susetyo began his involvement in social and political activities while at the Widya Sasana School of Philosophy and Theology in Malang, East Java, his hometown. The late Bishop Herman Joseph Sahadat Pandoyoputro mandated Father Susetyo to build a “true brotherhood” with Muslim leaders in the area. Father Susetyo co-founded the Setara Institute for Democracy and Peace. The institute’s main goal is to fight against discrimination and intolerance, including in relation to religion, ethnicity and gender.