The sense of charity in Sabariah began long before she went to Canada. As one of six children in her family, she saw charity being practised every day by her parents. 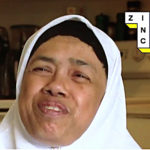 When the video of a tudung-clad woman feeding the homeless in Montreal was shared all over social media recently, people wondered how the cheerful 70-year-old woman who is Malaysia-born ended up in Canada. It turns out, Sabariah Hussein moved there some 30 years ago to work as a special education teacher and became a permanent resident after her marriage to Michel Paul Alain who is also known by his Muslim name, Mohamad Ali Abdullah. Her selfless work, feeding and caring for the homeless has gained her quite a reputation in Montreal, with many people dubbing her the Muslim Mother Teresa.
However, that sense of charity in Sabariah began long before she went to Canada. As one of six children in her family, she saw charity being practised every day by her parents. Her father, a teacher, and mother, a homemaker, would even help sponsor kenduris for poor Muslims unable to afford a decent thanksgiving or wedding meal. “I used to follow my mother around and help her chop vegetables, meat and all,” Sabariah says. Born in Johor, Malaysia, Sabariah’s family lived in Singapore for many years after her father got a job as a teacher in the island republic in the 1950s. They returned to Johor after his retirement. “Even in Singapore, we were still helping the needy regularly. After all, that is what Islam teaches us,” she said.

Home Made Sandwiches
After the death of her parents and a short stint working in Saudi Arabia, she got a job working as a special education teacher in Canada in 1985. “Since I have been here, I have been helping people. It all started 18 years ago. I used to see the homeless around town and I would give them sandwiches I made at home. “I also saw some Muslim sisters begging, so I invited them to my house for a meal. Staying on the streets is really terrifying, as they are exposed to so many bad things,” Sabariah said.
Troubled by what she saw and desperate to help the women get off the streets, Sabariah opened up her own home to them for one to two months, to shelter them from the cold. “Then I had an idea. If had some money, I could then get them an apartment. At that time, I was close to the Muslim students association of the University of Concordia. “I approached them and said, ‘look, I think I have an idea as to how we can solve the problem of the sisters on the streets and those who are troubled. I asked them what they thought about me selling some food items within the university premises to raise money for the apartment. The students agreed and sought permission from their university’.
“Alhamdullilah, it was successful and I started selling chicken biryani and salad. It was only five dollars for one plate and I was also allowed to use the university’s kitchen. “I managed to make 200 to 300 dollars a day and when more people knew about my cause, they gave me more money for the apartment,” Sabariah said. That was how her women’s shelter in CÃ´te-des-Neiges”Notre-Dame-de-GrÃ¢ce which is open to non-Muslims as well came about.
Today she runs a stall at a local mosque together with her team of volunteers, all in the continuous bid to make money to help the marginalised population in the city.

Partnering with Churches
Sabariah partners with two churches, a food bank and an NGO to provide food for the poor and the homeless. “About 10 years ago, I joined a food bank to help those who are troubled. I used to cook lunch for people who came to get lunch at the food bank. Then I asked myself if I could do more because here we only cater to about 50 to 60 people. “So I approached the church to help with their programme. Twice a week, the church will feed the needy, so I approached the co-ordinator and asked if I could chip in some food to help the destitute and the needy. They were elated and it’s been 10 years now I’m working with this church. “There’s also an Anglican church I got involved with this year. We deal with the homeless there together with an NGO that call themselves Peace Initiative,” Sabariah said. What is amazing is Sabariah does not get any aid from the Canadian government and runs her own show with donations and money she earns from selling her food. “The Anglican Church and the Peace Initiative also help provide supplies like vegetables. Sometimes when I need certain provisions, the Anglican Church gives me. The Rivers Edge Community Church in Notre-Dame-de-GrÃ¢ce also supplies necessities when asked. “I’m doing this full time for the people. God is great. He gives me rezeki all the time. He gives me enough to run the place and with the media attention now, I have my hands full,” she added.
Although she has had two strokes, Sabariah is not planning on hanging up her apron anytime soon and has instead adopted a semi-vegetarian diet in a bid to be healthier.
“You need to help as many people as you can. You have the ability, you go out there and do it. Help to serve the homeless and the defenceless. I have served Muslims in church, and they come because they know I’m serving food there. The more you mix with people, the more you understand and love each other better. Show love, show passion. We are compassionate people.”
Now, she has turned her attention to the country of her birth. “I’m coming to Malaysia with two projects. In Johor, I have a cousin who is an imam there. We are trying to secure a piece of land, it’s wakf land, so I need to go see that. With the money I have received here, we are planning to build a two-storey orphanage for Rohingya girls and if we have more money, we can combine and make an orphanage for Malaysian children too,” she added.

Does she have a message for those back in Malaysia?
“Love each other. We are under one banner and only God can judge us. Don’t be judgmental to others. Allah is the one who is going to judge us. “As for religious intolerance, it is everywhere in today’s world. There are good, devoted, dedicated people everywhere. Then there are some sick people out there too who are always trying to provoke and create tension and chaos among the religious groups. “So my advice is to ignore and shun them. Love and respect one another. United we stand and defeat this sick people’s mentality and ideology,” she added.
(www.themalaymailonline.com)