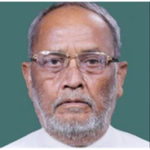 A grassroots man, he was elected from various constituencies and earned the sobriquet ‘Seemanchal Gandhi’ in Bihar.
Mohammed Tasleemuddin, RJD member of Parliament representing Araria in Bihar died in a private hospital in Chennai on September 17. He was attending a Parliamentary Committee meeting in Chennai last month when he developed breathing problem and was admitted there. He was elected to the Bihar Assembly and the Lok Sabha from various constituencies in Araria, Kishenganj and Purnea in north-eastern parts of Bihar. His legislative career spanned over almost five decades. He was 74.
He was born in Sisauna village of Jokihat tahsil of Bihar in a farm labourer’s family and began his political career as Sarpanch of the Jokihat Gram Panchayat. He was first elected to the Bihar Assembly in 1969 on a Congress ticket. He represented various Lok Sabha constituencies in 1989, 1996, 1998, 2004 and 2014. He was appointed the Minister of State for Home in Prime Minister Mr. Devegowda’s cabinet when Janata Dal was the dominant partner of the coalition.
He had earned the sobriquet ‘Seemanchal Gandhi’ due to his affectionate association with people of the region for whom he was a sentinel of courage, dedication and constant struggle. He had constantly raised issues of backwardness of the region at various legislative forums.
Away from corruption and extremely dedicated to the cause of the poor, Tasleemuddin did not believe in having an aura around himself and would reach out to the suffering masses and the aggrieved people at a time they wanted him most.
He leaves behind three sons and two daughters. His death was widely condoled in Bihar and Delhi.