Shafiqur Rahman Khan has won the Grinnell prize for his outstanding work in seeking to eradicate the bride trafficking trade (the selling of women into often multiple forced marriages) and empowering the agency and leadership of survivors.The Grinnell College Innovator for Social Justice Prize (the Grinnell Prize) honours individuals who have demonstrated leadership in their fields and who show creativity, commitment, and extraordinary accomplishment in effecting positive social change. And for this year they have chosen a young dynamic social activist Shafiqur Rahman Khan, who is the first Indian who will be receiving the award in October 2019 at Iowa, United States of America.
Shafiq, 35 years, hails from Gaya, Bihar. His foray in the field of activism was at the age of 15 when he joined the communist party with the hope of working for the well-being of the poor. But after working for almost 4 years with the party, he moved away because he was not satisfied. In 2004 he moved to Delhi, where he saw the same sight the sad plight of migrant workers and their sufferings. He met Swami Agnivesh, chairperson of the Bonded labour liberation front who was also working against sex-selective abortions. He became part of the back office team for ‘Multipath march against Female Foeticide’. He began his bachelor’s in social work (BSW) in 2006. It was during these days, when he was in a village to study about female foeticide, he saw a trafficked bride who wanted help, but his co-travellers advised him to avoid getting into the matter out of fear. He was haunted by her story, and after a month, went back to that village to meet with her. He learnt that she had been sold to another man. It was a shock for him to learn about how men were buying and selling women in broad daylight.Upon his return to Delhi, his mentor, Kamla Bhasin, advised him to work for justice. She encouraged Shafiq to prepare a plan for the change he wanted to see. He did so and received a Fellowship to implement his plan and became the first male Fellow of Jagori, a prominent feminist organization in Delhi.
In 2006, he founded his organisation ‘Empower People’. “I wanted to provide alternatives to women who were trafficked in the name of marriage. There was no organisation working with these women at that time,” Shafiq says. ‘Empower People’ is based in New Delhi India and operates in many regions across North and East India, most notably in Haryana’s Mewat district. It works to support law enforcement agencies and families of trafficked brides by locating and rescuing missing girls and women. Shafiq understood that being a male places him in a unique position to challenge patriarchy. Through the support of ‘Empower People’, several children of trafficked women are attending school. 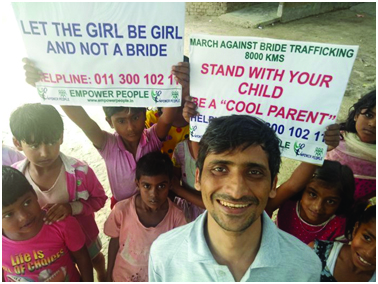