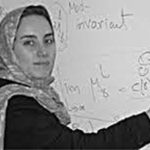 Stanford mathematics Professor Maryam Mirzakhani, the first and to-date only woman winner of the Fields Medal since its inception in 1936, passed away on July 14, after a four-year battle with cancer in USA. Mirzakhani was 40 years old. Prominent mathematicians world-wide reacted to her death in such words, “Maryam Mirzakhani’s death is a big loss and shock to the mathematical community worldwide. She was in the midst of doing fantastic work. Not only did she solve many problems, in solving problems, she developed tools that are now the bread and butter of people working in the field.”
As a young girl, Maryam dreamed of becoming a writer. By high school, however, her affinity for solving mathematical problems and working on proofs had shifted her sights.
She attended an all-girls high school in Tehran. Mirzakhani first gained international recognition as a teenager, winning gold medals at International Math Olympiads held in Hong Kong (1994) and Toronto (1995). In the Toronto Olympiad, she notched a perfect score and another gold medal. After earning her bachelor’s degree from Sharif University of Technology in 1999, she began work on her doctorate at Harvard University under the guidance of the 1998 Fields Medalist, Curtis McMullen.