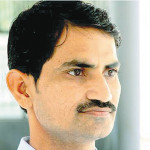 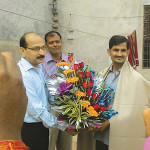 It was a rare honour for Mohammed Imran Khan, a Mathematics teacher from Alwar district of Rajasthan. Prime Minister Mr. Narendra Modi heaped praise on the young man while speaking to a crowd of Indian diaspora at Wembley in London on November 13. Developer of 52 unique educational Apps, Imran Khan was suddenly thrust into international limelight.
Son of a Mewati farmer couple Suleman Khan and Ashrafi, Imran had no degree in Information Technology. Though he has two post graduate degrees in English and Economics, his computer and IT knowledge is self-acquired. The 37-year old Imran khan teaches in Government Sanskrit School in Jaton Ka Bas village in Alwar district. His family hails from Khareda gram, 25 kilometres from Alwar town. He clarifies that he is not a Sanskrit teacher as has been projected in the mainstream media but teaches in Government Sanskrit School where Sanskrit is offered as an additional language besides all usual subjects. According to him, Rajasthan has an old system of these schools which are on par with the other matriculation schools.
Web to Mobile Apps
It was about ten years ago that Imran began tinkering with Internet and exploring ways to learn creation of websites. Having learnt the skill from the Internet, he created almost a hundred websites for various schools, all free of charge. But once while he was making a presentation before A. T. Pednekar, collector of Alwar district, he was advised by him to shift to developing mobile Apps as websites were no longer the handy tool. He took the help of engineering textbooks and began developing mobile Apps from 2012. First of them was ‘NCERT Learn Science’. Then there was no stopping him. Between then and now he has come up with 52 mobile Apps which can be downloaded on android phones and do away with the need of Internet connectivity and serve as a great teaching aid for rural areas.

30 Lakh Users
Imran Khan told Islamic Voice over phone from his village, nearly 30 lakh people have so far installed these mobile Apps from his website and there have been three crore views so far. He has mainly Hindi medium students as his audience and has developed Apps such as ‘GK Hindi’ (GK=General Knowledge); ‘RAS Teacher’ (RAS=Rajasthan Administrative Services); ‘Learn Science’, and Apps for Political Science, Mathematics, Geography and all kinds of competitive exams etc. Imran says the lessons are served in the Question and Answer format as well as with pictures for the learners. His App called ‘General Science in Hindi’ alone is being used by seven lakh people, he informs.

National Exposure
Major breakthrough came when the Union HRD Minister Ms. Smirti Irani invited her to make a presentation of his Apps at Vigyan Bhavan at the ICT Conference on November 7. It is from there that Prime Minister Mr. Narendra Modi came to know of him and referred his name to a vast audience of Indians at London asking people to invest in ‘Make in India’.
Talking to this scribe, Imran’s elder brother Ismail Khan said, Imran was a topper all through the school and college. Surprisingly, the Meo Muslim family has several graduates. Ismail is himself a lecturer in Government Senior Secondary School (i.e., Pre University College). Another brother Ishaq Khan is an engineer while a third brother Idris is an engineer with the Indian Oil Corporation, a public sector company. Idris’ wife Shakila is a lecturer in a Government Senior Secondary School.

No Moment was Dull
Imran’s 14-year old daughter Samia is already helping her father in designing the title page of the Apps. Ismail says Imran was a hardworking guy from the beginning. He would open his computer at 5 am and read newspapers and update the GK Apps. In fact no moment was dull in his life. He would also gather poor children in the school on Sundays and make them interact with VIPs and other people who could be role models. Imran says, he likes challenges in life and without challenges he cannot survive.

Free Broadband Connection
Following Mr. Modi’s reference, the Union Telecom Ministry provided him a free broadband connection on November 14. The gift was announced to him by no less than the Union Telecom Minister Mr. Ravi Shankar Prasad by making him a personal call.
Imran says he has no ambition other than removing digital divide in India and make it a homogenously informed society. Imran can be reached on cell phone: 0-97859-84283, website www.imran.gktalk.com, email : [email protected], Address: 21-Laxminagar, Alwar, Rajasthan.