During Anjum’s preparations, Irfan also developed an interest in Accountancy. 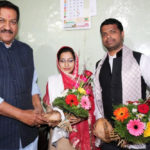 It is no secret that even today, many Muslim girls do not get an opportunity to pursue their dreams due to family responsibilities and unfavourable conditions. And this situation rarely changes after marriage, with many career-oriented women hardly getting an opportunity to build their careers due to the household responsibilities.
Which is why the story of Irfan and Anjum, a couple from Karad, a city in Satara district of Maharashtra, is so encouraging. The two studied for and cracked the CA (Chartered Accountant) examination after getting married and emerged as the first Muslim CA couple of Maharashtra.
Irfan Shabbir Bagban tied the knot with Anjum in 2011 when he was doing his Bachelor of Engineering (mechanical ). Anjum was also a commerce graduate and a career-oriented woman. She wanted to appear for the CA examinations and her husband extended his full cooperation and started giving her company to make his wife’s dream a reality. During Anjum’s preparations, Irfan also developed an interest in Accountancy and decided to make a career in this field.
They shifted to Pune for articleship at the SNJ and Company. After three years of continuous effort, Irfan managed to crack the CA exam in May 2017 and Anjum cleared it in November 2017. Speaking with TwoCircles.net, Anjum said, “My in-laws supported me a lot. I know well that after marriage life changes suddenly, but women should never give up and keep trying to achieve their goal.”
“We belong to the Bagban community which is popularly known for doing business. My father wanted me to become a CA because there was no Muslim CA in the entire Satara District. After hard work and with the help of family members, we achieved this feat,” said Irfan.
Confirming the claim of first post-marriage CA couple of India, Irfan said, “Sarvesh Joshi, our central council member, congratulated us by saying this has happened for the first time in the 63 years history of the institute.”
The couple is currently settled in Pune. Irfan is doing independent practice and Anjum is working as an Audit and Account Assistant in the Head office of Bharatiya Vidyapeeth, Pune.
Nadeem Sheikh, an activist of the Bagban Biradari education movement, congratulated the couple for their achievement. “I must appreciate Irfan for motivating his wife to appear for such an important exam. Anjum has also done a fantastic job and set up an inspiring example for all married women.”
(Taken from twocircles.net)