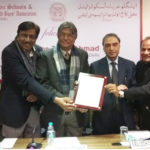 Prof. Talat Ahmad, Vice-Chancellor of the Jamia Millia Islamia was felicitated for being conferred with the 7th Bhartiya Manava Adhikar Samman 2017 and the “Most Eminent Vice-Chancellor Award 2017,” recently at an impressive function organised by the Anglo Arabic School and Delhi College Old Boys’ Association in New Delhi.
Speaking on the occasion , the Vice Chancellor, Prof Ahmad said that the awards and honours which he had received were attributable to the combined efforts of the faculty and staff of the university and not him alone. All these have synergised to take JMI at a higher level in the field of academic excellence. The award instituted by the All India Council of Human Rights, Liberties and Social Justice (AICHLS) was bestowed on him last month.
AICHLS is founded by Dr Anthony Raju, a Supreme Court of India advocate who is an internationally acclaimed  Human Rights defender, peace activist and social worker and is one of the country’s foremost voices of Human Rights. AICHLS has been added as a signatory to United Nation Global Compact which is the world’s largest corporate responsibility initiative with nearly 12,000 business and non-business participants in 140 countries.