Jazeera takes her Protest against Sand Mafia from Kerala to Delhi 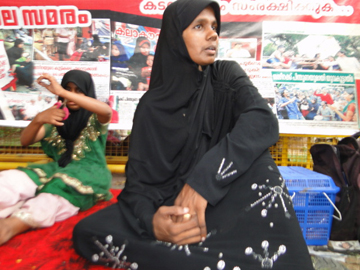 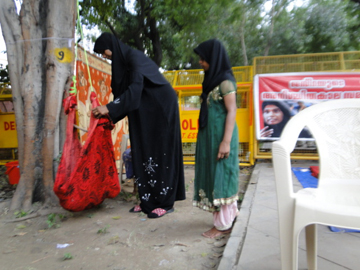 New Delhi: “I know my mother is on strike and hence we are with her,” says 9 year old Shifana, daughter of Jazeera who is on dharna at Jantar Mantar outside the Kerala House in the national capital.
The burqa clad tall and lanky lady from Kerala’s Kannur district, 31 year old Jazeera.V, has been fighting the lonely battle for over a year now with her two daughters” 13 year old Riswana and nine year old Shifana – and a baby boy, Mohammad, against the sand mafia in Kannur district.
Jazeera says that she is trying to meet the Environment Minister, to bring to the notice of the Ministry about illegal and rampant sand mining in her native district.
Jazeera was earlier on a similar dharna outside the Kerala state Secretariat in Thiruvananthapuram protesting against the sand mafia, and possible collusion of local administration and police. Her protest got considerable local media attention. She says that although Kerala Chief Minister Oommen Chandy met her once and verbally assured her, she did not get anything in writing.
This is when she decided to take her fight to Delhi and boarded the train. Her husband who teaches in a local madrassa, could not come with her, but she says he has been very supportive of her efforts.
They can speak only Malyalam, but that is not hindering them from conveying their message to the visiting journalists, activists and students. When Two Circles.Net met Jazeera, some students from JNU and Delhi University had come, and there was a girl student, Aparna who hailed from Kerala. She generously acted as our interpreter.
As we were still present there, some members of the Delhi Malayalee Association brought a carton of ten bottles of drinking water and a mosquito net. Jazeera’s battle against sand mafia literally began at home as, like most local youths, her brother was also involved. She says when she started her struggle, she never expected it to extend so long. It’s been only four days in Delhi and she is aware that it may take days, maybe weeks, before she is heard. Her eldest daughter Riswana, who was in class V, but is now missing her studies, has no qualms. She says, she knows that her mother is fighting for a cause and so she is happy to support her.
Breaking all stereotypes, Jazeera, who is always clad in burqa, has earlier worked as an auto rickshaw driver in Kerala. While still very young, she was married, but the wedlock was not a very happy one. She had two daughters from the first marriage. Her husband used to brutally torture her and so she decided to run away. Inspired by another woman driver, she learnt driving and took loans under the PM’s Rozgar Yojna to buy an auto rickshaw. However, she faced resistance from local auto drivers who could not grapple the fact of a burqa clad Muslim woman driving an auto. Although she earlier protested, she later moved to Kottayam and started a small book shop, where she met her future husband, a local madrassa teacher, Abdul Salam. When Jazeera was expecting her younger son, she moved to her native village to live with her family. This is when she was shocked to see the deplorable condition of the beach where she used to play as a kid, and which was in a dire state due to rampant illegal sand mining. That is when she started her crusade.
(twocircles.net)