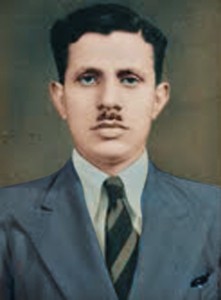 Gifted with a short life, this lawyer from the town rose high in public estimation to occupy seats of high repute in State Government, all because he kept people’s interest above his own.
By Maqbool Ahmed Siraj

Selflessness wins the hearts like nothing else. No wonder why people of Bhatkal to this day remember Jukaku Shamsuddin, the deputy finance minister in the first ever Government of the reorganized State of Mysore. This year happens to be his centenary year and the townsfolk have decided to celebrate his memory in a befitting manner. His descendants from three generations spread all across the world are contributing for construction of a hostel named after him in the local Anjuman Engineering College whose foundation stone would be laid later this year. Some years ago, the Navayath Association built a hostel in Bangalore to provide accommodation to students coming from the town and dedicated it to his memory.
Those were simpler times and Bhatkal was a small town with no electricity, sewerage system, tarred roads and telephones. The Middle East economic boom had not happened and unlike today very few Navayaths”the local folks as they are known”worked overseas. Poverty was rampant and there were no opportunities for higher education. Born in 1913, Shamsuddin aspired to attain higher education but the town merely had a higher primary school where he did his early education. He was sent to Kumta to enrol in the Gibbs High School with Siddique Abulhasan, a philanthropist from the town committing his support and patronage for the orphan boy. He went on to do his B.A.(Hons) from Kolhapur and LLB from the Poona University. This however did not deter him from learning Arabic from the local religious scholars. He held the distinction of being the first and only lawyer from the town for several years. On return from Poona, he married Zubeidah Begum, the daughter of his benefactor Siddique Abulhassan. Zubeidah lives to this day, nearly half a century after her husband’s death.
Money was never on his mind when Shamsuddin began practicing law. He would take up all kinds of cases and would fight till the last to the satisfaction of his clients, regardless of his community’s affiliation. If he was convinced of the merit of the case, he would not mind taking it up regardless of the financial capacity of his client. Several of these cases were fought for no or just a nominal fee. He was soon appointed as the Public Prosecutor in Kumta. He earned tremendous goodwill in the district of Karwar. This stood him in good stead as the people of the region decided to elect him for the Assembly of Bombay Presidency in 1946 elections. Effective representation for the region earned him proximity with leaders of the freedom struggle like Morarji Desai and Y. B. Chavan who later became national leaders.
Though he could not repeat his success in the 1951 Assembly elections, his practice and selfless services saw him being elected President of the Bhatkal Municipality and the local Anjuman Hami-e-Muslimeen which today runs a string of educational institutions. It was during his tenure that the town got its first tarred roads, sewerage system and a cottage hospital. Reorganisation of states brought districts of Karwar, Dharwar, Belgaum and Bijapur into the State of Mysore and he was elected to the first Mysore Assembly. Chief Minister Nijalingappa held the reins for a short period and was replaced by Dr. B. D. Jatti who did not think twice before taking him into his cabinet as Deputy Finance Minister. Development of Karwar district received priority in his scheme of things. Electricity and telephones entered the town during this period. Road to Sagar that used to be unmotorable during monsoons was metalled soon. Bhatkal town’s municipal limits were extended and localities such as Navayath Colony came up as a result. Street lights came up in the town.
Good work enabled him earn another term to the Mysore Assembly in 1961. Chief Minister Nijalingappa assigned him the portfolio for Power. He took up the Sharavathy Hydroelectric Power Project at Jog Falls as a priority. Its completion in a record time illuminated towns and cities of the region and allowed entrepreneurs to set up industries. He was always accessible by the people for all their sundry issues. The work for the Jamia Masjid near the City Market in Bangalore had stopped for years due to litigation. He untied the legal knots in an amicable manner to see its completion.
A man of frugal habits and spartan lifestyle, Shamsuddin would never miss a prayer even while he was a minister of the Old Mysore State between 1958 and 1964. “Official duties would not deflect him from the religious obligations of namaz or fasting,” recalls his daughter Naseema J, who now lives in Bangalore. Jukaku Abdur Raheem, his son who worked as an engineer in Dubai for several years is today Secretary of the Anjuman in Bhatkal. It is said those who are dear to God are recalled by Him early. He died in 1964 and left behind his wife, six daughters and four sons. All of them attained modern education and professional degrees and have either worked or settled in India, Middle East, Europe and the United States