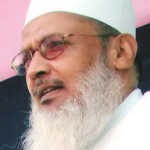 Muhammad Vali Rahmani, sajjada Nashin of Khankhah Rahmani, Munger has been appointed the acting General Secretary of the All India Muslim Personal Law Board. Rahmani, was earlier Chairman of the Bihar Legislative Council. He will carry out the duties as General Secretary Maulana Nizamuddin is ailing for some time. The decision to this regard was taken at a meeting of the executive committee of the Board held at Lucknow on June-6.