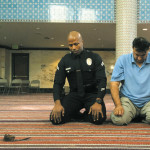 Alexander, a 36-year-old African-American is no typical law enforcement officer. He’s on the front lines of the fight against extremists, working to strengthen ties with a wary Muslim population on a community relations team in the LAPD’s counterterrorism bureau. He’s also a convert to Islam “ one of only several dozen Muslims on the 9,000-member police force.
“Some Muslims are suspicious of me,” said Alexander, whose partner, a Jewish cop keeps careful watch on him while he prays to ensure that nobody grabs his gun. “I mean, I pray in uniform, and I can tell they look at me and wonder if I’m being sincere or not. They wonder if I’m really a Muslim.” Alexander’s job is nothing like that of a TV cop or even the real-life police patrolling the rough streets around some of the mosques, schools and Islamic centers he visits. He sits down for coffee with imams and breaks bread with mosque directors, he attends forums and parades, passing out fliers and addressing community concerns. For over a year, he has tackled traffic woes and even rowdy congregants. Though he has yet to receive a tip that might be related to terrorism, his goal is to break down barriers between Muslims and police that will help solve and prevent crimes. One day, it might even deter a terrorist attack. Short of that, it’s already paying some dividends. A half-dozen mosque directors say their relationship with the LAPD is known in the Muslim community and might ward off those seeking to cause trouble.
The youngest of six children, he grew up in Alabama, though he lost his Southern accent long ago. He attended a high school in which he was one of the few black students and was a self-described “good old Southern Baptist,” rarely missing a Sunday sermon or weekly bible study.
After graduating in 1998, he joined the U.S. Army and became a medic. While stationed in Germany, the former Yugoslavia, Kuwait and Iraq, he began researching religions. Islam spoke to him. “I kind of stumbled upon it while searching for a path that allows me to be more spiritual,” he said. After leaving the military, he joined the LAPD, which serves a population of almost 4 million. Alexander’s squad is involved in pure outreach. It doesn’t conduct investigations or gather intelligence. Recently, he and his partner, Guy Golan, 30, drove more than 35 miles, visiting mosques and a school and breaking bread with directors of two mosques. Their mission was to gather information for an upcoming community forum.
(MuslimMirror)