Closest associate of Nelson Mandela who lived to uphold freedom and truth. 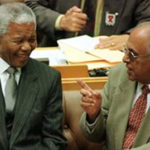 Ahmed Kathrada, closest associate of late South African President Nelson Mandela died in Johnnesburg on March 28. Kathrada spent over 26 years in prison with Mandela after being sentenced to life imprisonment by the Apartheid regime of South Africa in 1964. He was 87. For 26 years, he was incarcerated on Robben Island with Mandela. He was buried according to the Islamic funeral rites two days later and the South African flag flew at half mast till the burial ceremony was over. President Jacob Zuma, vice president Cyril Ramphosa, retired Archbishop Desmond Tutu paid rich tributes. Kathrada was born in 1929 in Schwezer Reneka, a town in the North West Province of South Africa and joined the political struggle against the racist regime of the Whites as a boy. He was fourth of the six children of a Gujarat Bohra family which had migrated to South Africa from Surat. Owing to his Indian origin and the policies of the time, he could not be admitted to any of the “European” or “African” schools in the area and thus he had to move to Johannesburg, 200 miles to the east, to be educated. Once in Johannesburg, he was influenced by leaders of the Transvaal Indian Congress such as Dr. Yusuf Dadoo, IC Meer, Moulvi and Yusuf Cachalia, and JN Singh. On 11 July 1963, Kathrada was arrested at the South African internal headquarters of Umkhonto we Sizwe (“The Spear of the Nation” “ the military wing of the ANC) in Rivonia, near Johannesburg. Although Kathrada was not a member of Umkhonto we Sizwe, he became one of the accused in the famous Rivonia Trial, which started in October 1963. He was charged with sabotage and attempting to overthrow the government and to start a guerilla war.
The trial ended in June 1964; Kathrada was sentenced to life imprisonment along with Nelson Mandela, Walter Sisulu, and others. He saw some of his children after 20 years and called it the worst kind of deprivation. When in 1989, a prison guard told him that they have received a fax message for their transfer to Johannesburg prior to his release, he asked him “What is a Fax?”
A prolific writer he penned six books himself or with co-authors. Most celebrated of the work was, No Bread for Mandela- Memoirs of Ahmed Kathrada, Prisoner No. 468/64.
President Jacob Zuma, Kathrada’s opponent, did not attend the funeral in accordance with the family’s wishes. But Zuma ordered the South African flag to be flown at half-mast to mark Kathrada’s death and postponed a cabinet meeting in order to allow cabinet members to attend the funeral. Last year, Kathrada had asked President Zuma to return the public money he had spent on renovating his rural home. He is survived by his wife Barbara Hogan who is also a leading stalwart of the African National Congress. He was awarded the Pravasi Bharatiya Samman by the Ministry of Overseas Indian Affairs in 2005