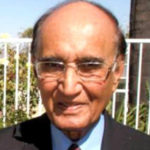 Well-known Urdu humorist and satirist, Mushtaq Ahmad Yusufi died in Karachi. He was 94. Yusufi was admitted to a private hospital a few days back and was undergoing treatment for pneumonia.
A banker by profession, Mushtaq Ahmad Yusufi was born in a family of academics on September 4, 1923, in Jaipur, Rajasthan. Yusufi completed his graduation from Agra University and LLB from Aligarh University. Soon after, his family migrated to Pakistan. Though he was a banker, Yusufi continued serving Urdu literature He was well-respected in the Urdu literary circles. His quick-wit and one liners were very popular. Some of his quotes became so popular that they are now being used as idioms. For example”’Mard ki aankh aur aurat ki zaban ka dum sab se aakhir main nikalta hai.’ (A man’s eyes and a woman’s tongue die last)