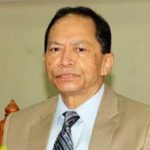 Surendra Kumar Sinha, Bangladesh’s first Hindu Chief Justice, is believed to have been forced to go on leave amid reports that the government was upset with him over his decision to scrap parliament’s authority in impeaching Supreme Court judges.
Sinha, 66, left for Australia on October 13, saying he was “embarrassed” over the controversy surrounding his July ruling. He also denied claims by the government that he was sick.
But Sinha added he “firmly believes” his stance over a recent verdict was misinterpreted to the government, upsetting Prime Minister Sheikh Hasina, but expected her to realise the fact soon.
Sinha, Bangladesh’s first Hindu chief justice whose tenure expires in January 2018, in his written statement said he was a “bit worried about the independence of the judiciary”.