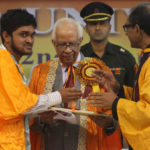 Irfan Habib, a student of Mathematics at Jadavpur University, has won two gold medals during his undergraduate at the 62nd Convocation of the University held on December 24, 2017. Irfan topped his Mathematics Department with 93% marks for his B.Sc. degree along with securing the highest marks in the entire Science Stream. Though his family members and teachers are excited at his achievement, Irfan has only continued his excellent work at the university and had secured the top position in the two previous years. The Convocation was held on the university main campus at Jadavpur recently and was attended by former President of India, Pranab Mukherjee and the Governor of West Bengal, Keshri Nath Tripathi, Vice Chancellor Suranjan Das and many other University professors and administrators. Irfan is the son of Md. Saifuddin Ahmed, a senior madrasa teacher under Madhyamik Siksha Kendra scheme, and belongs to Sonakur village of Haringhata block in West Bengal’s Nadia district. Irfan is currently pursuing M.sc in Mathematics at Jadavpur University.
(Extracted from twocircles.net)