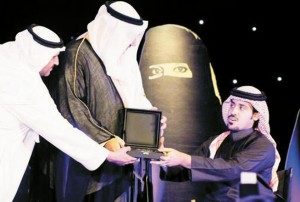 Abdullah Al-Shalagi is a shining example of how determination coupled with a strong spiritual life can overcome all odds.

The Saudi man, who has a disability and uses a wheelchair, was one of the finalists at the Israr (Arabic for ‘Determination’) Awards on January, 23, 2014, in Jeddah, which honored those who showed the most drive to find jobs.
He captured the hearts of those present at the awards ceremony with his self-confidence and commitment to make the most of life. Labor Minister Adel Fakeih gave him a plaque in recognition of his achievements.
Life has not been smooth sailing at all for the man from Hail. He remembers how depression and frustration as a youngster over his disability threatened to overwhelm him. He confined himself to his bed, resulting in his weight ballooning. In addition, he recalls, how his family felt that there was little chance for him in the world but to stay at home.
“My family was also one of the reasons for my despair and frustration. They did not encourage me to continue my education. There was also a lack of education facilities for people with disabilities in Hail at that time. My family kept telling me that it was no use continuing my education because I was a person with a physical disability.” Faced with a disability and obesity, and little motivation from those around him, he stood at crossroads. It was at this point that he turned to Almighty Allah for guidance, strength and the willingness to change his life.
“I started with the most important thing, my health. I succeeded in losing a significant amount of weight and finally jumped out of bed, metaphorically speaking- into my wheelchair.”
“It was then my new life started, I had become mobile. This success led to further hope and the desire to help others.
I started an Internet campaign on social networking sites highlighting the rights of people with disabilities and supporting them. I increased my knowledge by reading about the rights of people with disabilities online and in magazines and newspapers.
“The campaign was a success and had a big impact on my followers and readers. This helped me get the first position I have ever held, which was a member of the Hail Service Committee for People with Disabilities.
“After a while, I became a supervisor at Saudi Arabian Airlines for transport services for people with disabilities. Then I was charged with establishing a committee to monitor and assess the services for passengers with disabilities at the airline.”
Al-Shalagi said he later decided to do his secondary school education from home and eventually graduated with flying colors. He also started to improve his English and computer skills.
“I continued to chase more success and became responsible for the public relations and media department at the Charitable Society for Disabled People in Hail.”
Al-Shalagi said he is not self-conscious about being in a wheelchair anymore. “Today I am no longer that young person who was deprived of an education and a normal life, who remained quiet and stood still. I’m a leader who wants to guide and lead his friends, brothers and compatriots with disabilities to a better life.”
(arabnews)