Sheeba Ameer who lost her daughter to cancer is now helping hundreds of cancer patients. 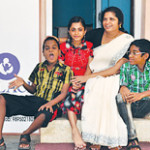 Sheeba Ameer saw her daughter suffering through the pain of cancer and eventually losing her life to the dreaded disease. This grieving mother is now providing affordable cancer care to other patients through her organization, Solace. Sheeba Ameer’s life literally came to a standstill when she found out that her 13-year-old daughter had cancer. She spent several years in hospitals, consulting doctors and getting the best possible treatment for her beloved daughter. “It was very painful not knowing whether my daughter would be alive the next day. We were fortunate to have money to get good treatment for her at the Tata Memorial Hospital. But not everyone is privileged enough to afford such treatment,” she says. Sheeba’s daughter struggled to fight the disease and, after several sessions of chemo and a bone marrow transplant, she recovered for a while. But she caught an infection and the struggle with cancer started all over again “ a battle that she lost. While her daughter was still struggling with cancer, she started an organization, Solace, in 2007. The aim was to provide affordable medical, psychological and social help to cancer patients and their families. Solace is based in Thrissur, Kerala. It has three centres and a team of 30 to 40 people who take care of the smallest needs of cancer patients. From counselling family members to extending financial aid, Solace is like a ray of hope for hundreds of people suffering from cancer. Sheeba, through her organization, provides financial aid of at least Rs. 8 lakh every month to the many beneficiaries she works with. Solace has successfully helped over 900 patients so far. The initiative has received liberal donations from many donors, well-wishers and supporters from across the world. Sheeba Ameer was conferred the CNN Real Hero Award in 2011. If you would like to reach out to Sheeba Ameer and help her expand her initiative, you can provide Solace with financial aid. For more details, check out their website http://solace.org.in/
(Source: www.thebetterindia.com)