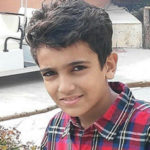 Abdur Rahman Hussain (13) of Egypt has been titled the “smartest child in the world” after he came in first at a global competition. The contest entitled ‘The Intelligent Mental Arithmetic International Competition’ was organized in Malaysia. Some 3,000 children belonging to more than 70 different countries in the world participated in the contest. The competition that judged problem-solving skills of all the contenders was based on a 4-page complex test to be solved in the least amount of time. Abdul Rehman answered 230 of the most mind-boggling arithmetic questions in a time span of mere eight minutes and claimed the first spot in the competition. Abdul Rehman attributed his achievement to all his teachers who had been training him for the competition since 2012.