Thair Abud’s 8,000 km Journey on Foot from Austria to Makkah 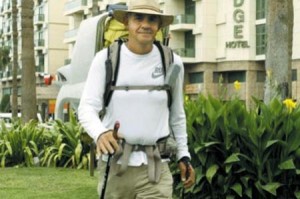 Dubai: An Austrian man is on a sacred mission to keep a promise he made to his sister battling cancer. A qualified civil engineer Thair Abud (49), who dumped a ¬10,000 plus (Dh42,000) job as general manager of an Austrian MNC, before setting out on the sacred journey, is expected to complete over 8000km route from Austria to Makkah in April 2015. Thair Abud started walking from his residence in Graz, Austria on July 25, 2014 in a pair of jeans and a T shirt. He reached Dubai in February 2015 – his fourth stop, according to Gulf News. After a short break in Dubai, he set out on his journey’s last leg “ a roughly 2,000km road trip via Salalah in Oman to Madinah, and eventually to Makkah, the final destination. While talking to Gulf News, Abud, son of an Iraqi father and a German mother, recalled how it all began last summer. “It was”, he remembers, “Following a ‘short’ 2,500km trip on foot from Austria to Santigo de Compostela in Spain the previous year after his sister, Zaussen, now 50, was diagnosed with stage III breast cancer.” “When I arrived back home from Spain, she told me that when her pain was unbearable, she found comfort by following and reading up more about my trail. It is then I made an offering that if she turns healthy again, I will walk all the way from Graz to Makkah. “The day I reach Makkah, it will be the culmination of a word I gave to my sister after she was detected with cancer. Today she has, after several rounds of chemotherapy, beaten the killer disease and is undergoing her breast reconstruction therapy,” explained the father of three who speaks Italian and Spanish besides fluent Arabic, German and English.