Abdul Rasul, an IT professional has entered the Guinness Book of Records for the largest collection of 5,915 stamps featuring mosques. 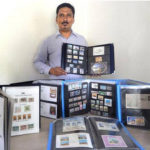 Chennai: Y. Abdul Rasul has been collecting stamps since he was 10 years old. He was one of the many philatelists collecting whatever stamps came his way till a meeting with ViswanathaIyer, another philatelist, in 2005 paved the way for his entry into the Guinness Book of Records. “He gave me his collection and advised me to focus on the theme of mosques” recalls Mr.Abdul Rasul, a 41-year-old IT professional who has entered the Guinness Book of Records for the largest collection of 5,915 stamps featuring mosques. The oldest stamp in his possession was released by the Afghanistan government in 1892. He runs an interactive website  www.mosquestamps.com.
(Extracted from thehindu.com)