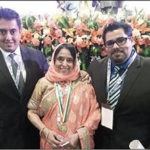 Zeenat Mussarat Jafri, 65, was given the award by President Pranab Mukherjee for providing quality education to children of Indian expatriates in Saudi Arabia. She started the first Indian school in Riyadh in 1982. “My mother is also the first woman of Indian origin from Saudi Arabia to get the Pravasi Samman,” Mohsin’s elder brother Syed Mudassir said. A native of Lucknow and a former teacher at Kendriya Vidyalaya, Zeenat went to Saudi Arabia in 1979 with her husband Musarrat Jafri, a former DRDO scientist who later joined the Saudi government as a chemical expert. Zeenat established the International Indian School in Riyadh from the family’s savings. From the first batch of 20 students in 1982, the school now has 12,000 students and is affiliated to CBSE.