Social Reform “ How and Why?

Islamic Voice 0 May, 2015 12:00 am
Can People be Religious without being Rigid?
Commitment, Akhira and Power of Engagement
The Muslims’ Intellectual Decline

Postponing social reform and progress in order to keep the millat united does not work in today’s age. 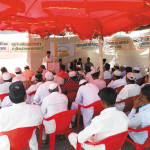 The subject of social reform is like a joke about bad weather in the West: Everybody talks about it, but no one does anything to improve it. Unfortunately, we all tend to think that we ourselves are all-right, it’s the other people who need to reform their ways, their customs and attitudes.
It’s worth examining what exactly people mean when they speak of social reform,islah-e mua’shira in Urdu. The learned imams at the Juma prayers, and the speakers at public meetings always exhort their audiences to observe all the principles of Islam in their lives, and that they should stay away from bad influences on their morals, presumably referring to the Internet. No one expects that this kind of appeals would have any impact on the listeners, that anyone would be inspired to make changes in their attitudes. We all feel good after listening to these sermons and go home happy, thinking that we have fulfilled our social and Islamic obligations.
A public meeting organized in April 2015 to discuss social reform attracted thousands of young people, mostly young, in Bhiwandi, according to a report in a local Urdu paper. It was addressed by many maulanas and muftis, most of them graduates of Darul Uloom, Deoband. Their speeches did not deviate from the traditional line: Muslims must observe Islamic laws and principles.

No Talk on Social Evils
The report cited concern at the decline in people’s morals, but absent from the discussion was any mention of the social evils, such as dowry demands, wasteful and ostentatious wedding ceremonies, physical abuse within families, irresponsible polygamy among the lower classes, educational backwardness, skin-colour prejudice, even caste consciousness, so on and on, not to speak of a habit of borrowing money without knowing how or when it could be paid back. Gender justice is far, far from our minds, although the media in the larger society has heated discussions about the subject day in and day out.
No doubt, Muslims of Bhiwandi, like the minorities in Ahmedabad and Muzzafarnagar, are vulnerable to murderous communal violence. In an atmosphere of hostility when the Shiv Sena demagogues talk of taking the vote away from Muslims, any talk of internal social reforms seems untimely, unnecessary, and harmful for social peace and unity. It seems wise to suppress differences of opinion among people, and within families and among friends, too.

Defensive Posture
The problem is that for the past 70 or 80 years we, the Muslims of India, have been in a defensive posture, closing ranks, gripped by a siege mentality, mounting intellectual cannons from the ramparts, believing that all internal dissent is dangerous to unity, the paramount value. Collective self-criticism is taboo. Any dissent in a religious discourse leads to charges of straying or misleading, or worse: apostasy.

No Postponing Debate
The result: Total stagnation in the social sphere. The same problems confront us today as they did when we acquired a modern consciousness, hesitantly, in the 1940s, roughly speaking. The fact is if there is no debate about the nature and severity of our social problems, there can be no progress, no movement on that front. Public and private debate is a must for any social progress in any society at any time on any issue of importance. Social change has never happened in any foreign society without paying the price of some disunity, some rancour.
Indian Muslims have faced a paradox: Social cohesiveness and unity and no social reforms, or debate and rancour, more social divisions with uncertain results, or fitnain the language of Muslim scholars, the ulema.

Unity with Social Progress
In the existing psycho-political situation, what can be done? What is possible? It seems reasonable to desire both social peace, cohesiveness, and progress against social evils. To reach this goal, a few conditions must obtain in society: Tolerance for dissent, a broad consensus in principle that disagreement is OK, a dissent from centuries old practice, sanctioned by the Islamic scholarly establishment, does not necessarily make one an outcaste, a denier or an apostate. The last person to exercise this kind of despotic authority was Aurangzeb, and he has been dead for 308 years. The idea of pluralism must be widely accepted. That means realizing that in matters of common social problems, nobody is in possession of all the wisdom. Once this is accepted, we will have to engage in introspection, self-criticism, individually and collectively.
We need to take a fresh look at our collective practices. Take for example public meetings in which scholars thunder about the Muslims’ accomplishments in history, the greatness of our values, and the utter moral degradation in which we have fallen. It’s as if Altaf Hussain Hali’s Madd-o Jazr-e Islam* is being blasted out of loudspeakers, except in the harsh voices of old men. This way of dealing with collective problems is 19th century methodology, useless in the 21st. Nobody gains any great insights into individual behaviour and starts the process of change.

Smaller Audience for Debate
Wouldn’t it be better to gather people in small numbers in community centres and school where everybody gets a chance to speak, if desired, and audiences participate on an equal footing? Leaders emerge from small group interactions. We all learn new ways of thinking from one another when we participate in discussions in a free and mutually supportive atmosphere. This is the bottom-up rather than top-down approach to communications. This is what is taught in business school, and used by large companies.
The participatory method of debating ideas is widely used in Malaysia and Indonesia, and to a large degree in southern India, too, where educational standards are much higher than in the north. (Bengaluru’s Janagraha movement offers a powerful model.) The subjects for such symposiums can vary widely, from marriage customs and practices, child labor, electoral preferences, violence within families, and perhaps also the evils emanating from the Internet.

Discard Old Methods
Social change will never happen using the old way of organizing public meetings, addressed by Islamic scholars. The larger the crowd the more meaningless or superficial generalities will be expressed. The maulanas and the muftis do not have the answers for today’s problems. All they know is what they had learned as history, their understanding of Shari’a as they were taught to apply to different conditions and situations. They do not have the training, the learning to understand how and why people behave the way they do. Look at the curriculum of Darul Uloom, Deoband. None of the courses offered there teach human psychology, sociology, economic behavior, management etc.
How then can they lead the way in any kind of social reform? All the learned ulema can do is sermonize, and perhaps suggest how some legalist Islamic solution was found to a similar problem in the past. That kind of historical fiqh is no use to modern problems.
The writer, an Indian American, is a retired bureaucrat living in Washington; he has spent several years in India working on documentary film and writing projects. Email: [email protected]