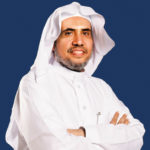 It does not take long to realize that there is little of the conventional about Sheikh Mohammed bin Abdul Karim Al-Issa “ and not just because his words and deeds have raised eyebrows around the world since his appointment in August 2016 as secretary-general of the Muslim World League (MWL).
Many Muslim clerics, for example, prohibit photography, and other forms of art. But within minutes of our meeting at an MWL relief center in Jeddah, Arab News photographer Ziyad Alarfaj and I were treated to a sermon on how best to take photos and edit them. Al-Issa, it turns out, is not only a practicing calligrapher but also an avid photographer.
He is a controversial figure, selected to preside over one of the most controversial Islamic organizations. The MWL has had its share of criticism since it was founded in 1962, but the past two years have brought an altogether different kind of controversy. If extremists’ words and deeds in the name of religion are a disease that must be treated, then Al-Issa’s words and deeds in response are a form of “shock therapy.”
Yet while the MWL’s new direction continues to anger hard-liners, Al-Issa continues to be received in high places such as the Vatican and the White House. He has also opened previously closed doors with the extreme right, sitting and talking with, for example, the former French presidential candidate Marine Le Pen (and for a keen photographer, that was a picture truly worth a thousand words).

Moderate Islam
Al-Issa’s appointment has clearly coincided with the implementation of Saudi Arabia’s reform program, Vision 2030, by Crown Prince Mohammed bin Salman. At a global forum in Riyadh last year, the crown prince said he sought to destroy extremists “now and immediately,” and spoke of returning Saudi Arabia to “moderate Islam.” His words coincided with remarkable decisions, such as limiting the powers of the Committee for the Promotion of Virtue and the Prevention of Vice, ending the de facto ban on women driving, and reopening cinemas.
Because Al-Issa’s tolerant and modern approach “ a world away from the image of Islam that in many minds is linked to exclusion, militancy and extremism “ is very much in line with the vision and statements of the crown prince, some portrayed the sheikh as merely a man to be utilized during this phase of reform.
“Not at all,” he responds. “What I said in my past, say now and will say in the future reflects my convictions … deep convictions, because they represent the true Islam that I believe in, and not the result of any phase.”

Confronting Extremism
The crown prince’s approach is making a genuine difference in confronting extremism and empowering moderate scholars to create a moderate discourse, Al-Issa believes. “The difference happening now is in the existence of initiatives and practical programs to implement this discourse.” Current programs in MWL centers worldwide focus on moderation and “the explicit call to promote national integration of these communities in their homelands.”
In another indication that he is unconventional in his work, Al-Issa is not convinced of the effectiveness of these centers in the modern age, and believes the message of moderation can be more effectively delivered on social media platforms. “My policy is not to open new centers, because … now is the time for social media,” he said. “New media plays the role of a thousand centers. The message of Islamic moderation, wisdom and humanity that we send in one tweet is doing the job of dozens of centers.”
In addition to social media, what Al-Issa relies on in his work is continuous travel and public engagement. Hardly a week passes without a photo of him with a religious or political personality in one country or with Muslim communities in another, or without a speech or lecture in a think tank or conference. And because he believes that the MWL today represents moderate Islam, his frequent trips and public appearances give him a role closer to that of an Islamic “foreign minister” than a secretary-general in the bureaucratic sense.

Peace and Harmony
Perhaps this is why, recently, in Florence, Italy, Al-Issa was awarded the prestigious Galileo Prize in recognition of his work in promoting peace and harmony among civilizations. Such an award, he believes, shows that international institutions are fair in their work, and have no preconceived agendas.  Those who believe otherwise, Al-Issa says, are victims of the conspiracy theory all too common in our part of the word that the West is plotting against Islam. “Many Muslims have a negative perception that there is a conspiracy against Islam and Muslims. But, my brother, the West gave up its religious state, chose secularism and fought Christianity as a way of life, so why do you think that it is targeting you?” he said.
“We went and had a dialogue with the West and the Far East, and found an appreciation of Islam, a love for Muslims and a desire to cooperate with them when they learned about the truth of Islam.  “Do not blame the extreme right if it becomes suspicious about you because of an (existing) example in front of it that it exploits in a political game. Had it not had such an excuse, it would not have used this extremist speech.”
However, the problem worldwide is the absence of an impression of the Muslim moderation and tolerance that Al-Issa promotes. So why are there not more sheikhs like him, calling for the same things as he does?

Correct Understanding
“Some do not realize the seriousness of negative perceptions against Islam, and therefore they do not interfere in correcting them,” he said. “Some fear the reaction of extremism and do not want to engage in debates with extremists. And the religious knowledge of others does not reach the level of correct understanding.”
Al-Issa criticizes those who speak in the name of religion based on “feelings, impressions and religious zeal devoid of any scientific thought or proposal.” His own views, meanwhile, firmly rooted in Muslim theology, are anathema to hard-liners.  An example was when he said that not wearing the hijab did not make a woman an infidel.  “I think no Muslim can call a Muslim woman an infidel or question her values because she has never worn a hijab,” he says.
More recently, in Washington DC, Al-Issa visited the US Holocaust Memorial Museum, criticized Holocaust deniers and condemned this heinous crime “ which was deemed remarkable coming from a cleric of his caliber and an organization of MWL’s prominence. However, it did not pass without drawing hate speech from extremists who saw it as an attempt to come closer to Israel at the expense of the rights of Palestinians.  “We call for a just peace in accordance with the Arab initiative,” he says. “East Jerusalem (capital of Palestine) and West Jerusalem (capital of Israel), and there is no choice but peace.”
Despite his controversial remarks, Al-Issa says he is not afraid, although he knows his words may provoke some people. “I speak with logic, and I have right and justice on my side. And he who holds right and justice, God willing, is reassured deep in his heart. But I take my necessary (security) precautions without exaggeration.”
(For the complete article, see arabnews.com)